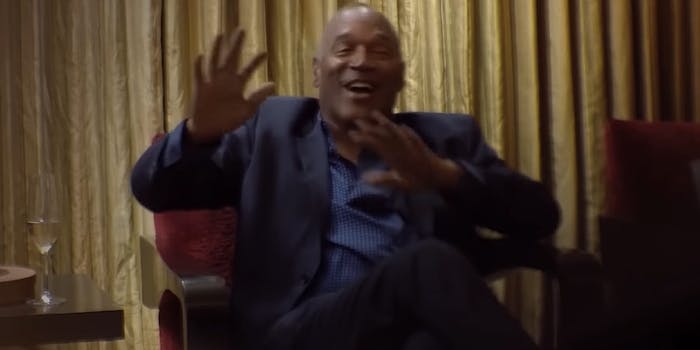 Sacha Baron Cohen‘s Who Is America? only ran for seven episodes this summer, but it attacked political discourse without mercy and even ousted an elected official. It skewered YouTube culture and understood how to make a dent in the Trump age by ignoring the pleasantries. Sunday night’s finale was supposed to target Sarah Palin, but that interview was left on the shelf for reasons unknown.

Instead, the comic and impersonator trolled the heck outta OJ Simpson.

Posing as Gio Monaldo, his fictional Italian fashion mogul disguise, Cohen sat in a Las Vegas hotel room with Simpson and joked about killing his girlfriend.

“Me and you we got something in common: We both—how you say—ladykillers,” Cohen riffed, referencing the 71-year-old actor and football icon’s infamous murder trial.

Simpson played it down and laughed it off, though, asserting that “I didn’t kill nobody.”

The series ended without a jaw-dropping political reveal, stuffing the Simpson bit into the end. There was a great Naked Gun reference:

Cohen on Sunday also tweeted that this project was finished, and there would apparently be no season 2.

“Tonight is the last EVER show of ‘Who is America’. Thank you to all of you who enjoyed it,” he wrote on Twitter.

Of course, that’s what he’d like us to think. If he does get the gang together for another series of character-driven stings, however, here’s hoping the writing staff hires some women.