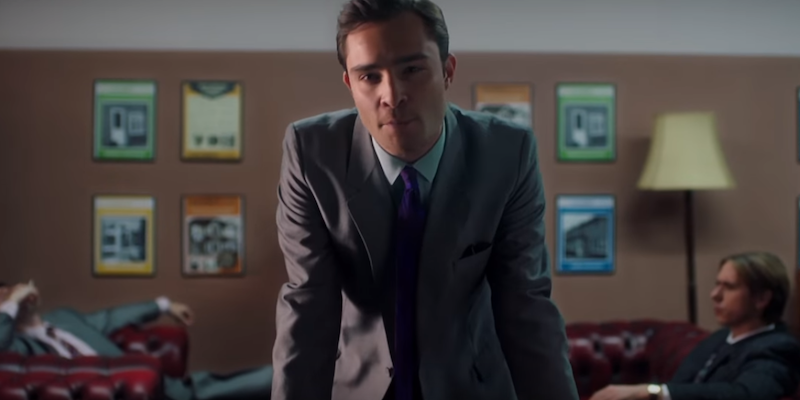 ‘White Gold’ is ‘Wolf of Wall Street,’ but for window salesmen

The BBC comedy, set in the '80s, lands on Netflix as a binge-worthy pleasure.

White Gold is the kind of BBC import that frequently lands on Netflix. It’s slight, forgettable, and unlikely to generate any substantial amount of buzz. But it’s an entertaining comedy worth an afternoon.

Set in 1983 Essex, White Gold examines the rise in popularity of UPVC (unplasticised polyvinyl chloride) double-glazed windows, which prove to be a windfall for a sleazy group of salesmen. The sleaziest and slickest among them is Vincent Swan, played by Gossip Girl alum Ed Westwick. Vincent is the lead salesman at Cacet Windows, where junior salesman Brian Fitzpatrick (James Buckley) and Martin Lavender (Joe Thomas) both compete with him for profits and with each for other for Vincent’s approval. There’s a lot of unruly testosterone in this show, and if American viewers assume the English setting is somehow going to class these characters up, they’d be wise to think again. Although it is a testament to this current age of television that a show about plastic window frames can even be a thing, much less a remotely interesting one.

White Gold is like The Wolf of Wall Street, if the movie was focused solely on the days when Jordan Belfort was making his name selling penny stocks. The ‘80s setting helps manifest this comparison, as does Vincent’s habit of breaking the fourth wall, which he does at a frenetic pace. At times the narrating and talking into the camera feel near constant, so much so that one has to imagine series creator Damon Beesley knew the Wolf comparisons were sure to arise, and just decided to embrace them.

Beesley, who got his start on Flight of the Conchords before going on to co-create British favorite, The Inbetweeners, has also likened Vincet to Don Draper. While this is not an unfair analysis, as the show leans into the “unlikable straight, white male” protagonist trope with careless abandon, viewers are more likely to find Vincent a cross between Jordan Belfort and Chuck Bass, the Gossip Girl character which first shot Westwick to stardom.

Like Chuck Bass, Vincent Swan is roguish, amoral, and devilishly charming—also the traits which make him such a great salesman. Unlike Bass, Vincent comes from working-class roots and has a wife and family to support (the latter of which would have been especially surprising for Chuck, considering Gossip Girl was about rich kids at a fancy Manhattan high school.) Westwick has a lot of fun with the role, and is clearly meant to play this type of character. However, he never sells the blue-collar elements of Vincent’s personality.

It doesn’t help that Westwick himself is just 30, as his wife on the show, Sam, played by Linzey Cocker. Ages aside, what made Don Draper such a compelling archetype is that he was in many ways the classic American family man, albeit a tarnished version of that ideal. Vincent, meanwhile, isn’t quite so complex (at least not in White Gold’s first season.) Westwick’s scenes with Cocker are fine, and she’s a perfectly suitable love interest for the show. But making Vincent a family man does little to improve his character or make a comment on English ideas of gender roles. White Gold needs Vincent’s relationship with his wife to give it some emotional anchor, but the show and Westwick are at their best when Vincent is being bad and having a blast doing it. Unsurprisingly, things start to get good when his character ingratiates himself with a local criminal element. Vincent is an ambitious wanker, as he freely admits in the opening monologue of the show, and White Gold is better for it.

Buckley and Thomas (who also wrote one episode of the show) are fine in their respective roles, though neither is especially memorable. As Fitzpatrick, Buckley is the nasty clown to Thomas’ more sensitive Martin. Together, they’re like the Drama and E to Westwick’s Vincent Chase, or perhaps more accurately, his Ari (sorry to bring up Entourage everyone, but the comparison was sitting right there, down to the name.) Martin has moments which are nearly compelling, and the show seems to want to cast him as the moral compass. Yet in the end, he’s not really much more virtuous than his co-workers, just less obnoxious. It’s almost like Buckley and Thomas are both on a different wavelengths than Westwick. Each alums of The Inbetweeners, they’re on a less sexy, more comedic show.

Of course White Gold is already a comedy, but it’s lighter on laughs and heavier on atmosphere. The costumes, cars, and most of all, the music all scream “this is the ‘80s!” It’s an issue which many period pieces from this time tend to run into, but at least Beesley is milking his ‘80s fetish for all its worth. The first season features practically every pop hit from the era you can think of off the top of your head. Maybe music licensing is different in the U.K., or the BBC gives all its shows huge soundtrack budgets, but White Gold’s roster of songs is impressive, if not occasionally overwhelming.

White Gold is not going to be the Netflix original anybody remembers from this month. And there are many better BBC shows you could be watching instead. Crashing, for instance, from Phoebe Waller-Bridge, is another six-episode comedy you can stream on Netflix right now. Or if you want a more original show where the lead character talks to the camera, head over to Amazon Prime, and check out Waller-Bridge’s excellent, wrenching Fleabag.

But White Gold knows what it is, and creator Damon Beesley delivers on its promise of shallow pleasures. It’s possible that White Gold will go deeper next year, as it was recently renewed for season (or “series,” as they call them in England) 2. Until then, this is an entirely passable show for fans of The Inbetweeners and Gossip Girl alike to turn their minds off to.