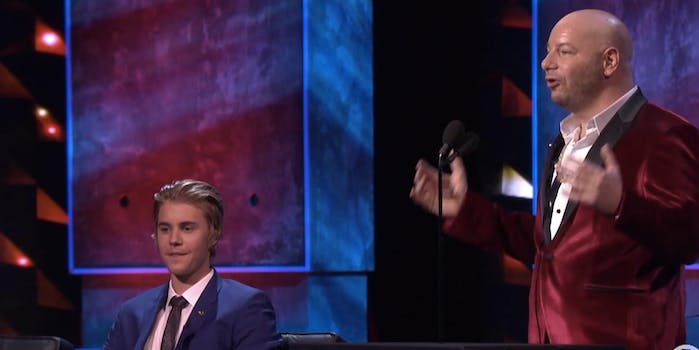 New app Whipclip wants to all of those great Twitter jokes.

In the pantheon of social media-driven television events, the March 30 Comedy Central roast of Justin Bieber has the possibility of blowing up the Twitterverse with a slew of powerful punches from the growing world of Biebs haters.

To add a new content dimension to the 140 character limit, Comedy Central is teaming up with Whipclip to allow viewers to grab snippets of the live ambush, add their personal zingers, and tweet to #BieberRoast. Whipclip is a mobile app that works with broadcast partners, enabling fans to go to a near-realtime library of TV content, annotate those segments, and share via social media.

The advance word on the celebrity roast of Bieber indicates that host Jeffrey Ross and participants including Snoop Dogg, Shaquille O’Neal, Kevin Hart, and Ludacris tear the young pop sensation a new one, poking fun at his young fans, former girlfriend Selena Gomez, and his well-celebrated abuse of celebrity.

A number of the jokes have leaked via social media, including one about the late Paul Walker that was scrubbed, showing that even Comedy Central knows where to draw the line. Apparently, one of the co-roasters, Martha Stewart, is willing to test those limits with some jokes about her marijuana brownies.

Bake a batch of @SnoopDogg's brownies and watch @MarthaStewart on The #BieberRoast, airing March 30.https://t.co/hkO2BEtiDy