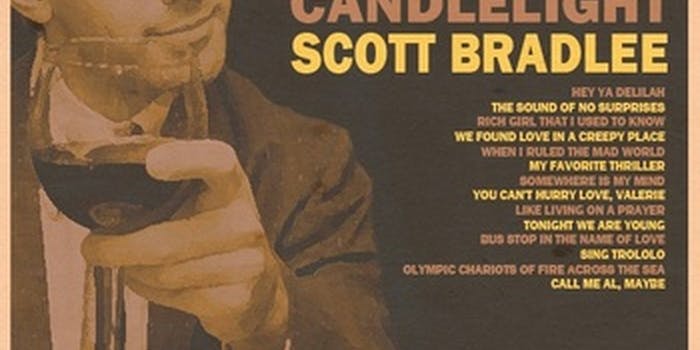 Start your week right with the Daily Dot’s Morning Mashup, the best music remix from around the Web. Turn up your speakers or pop on your headphones, and bring the funk.

This week’s Monday Mashup brings less “funk” and more “fraught,” so it may be considered something of a gift to those otherwise-ignored emo philosophy majors who wish their lives had a soundtrack as cool as the football team’s. You’re welcome.

This mashup is also a bit different in that it’s performed by one man at one time, and recorded live. Normally that would preclude it from being a mashup, since one must generally mash A into B, but since Scott Bradlee has written the mashness right into the arrangements, that’s not a problem.

A prolific postmodern performer, Bradlee is the man responsible for the unholy alliance of Motown and Nickelback, thanks to his Kickstarter-funded tribute album.

“When I Ruled the World” is a first-person account of the French Revolution, as told by the King whose execution was its proudest moment; it is not an upbeat ditty. “Mad World” was featured in the film Donnie Darko, as a mentally unstable teenager looks out on a planet he’s not sure he should save if he could. When the two are knitted together by Bradlee, the whole cloth is rather bleak, but beautiful and contemplative as well.

As he explains on the album’s Soundcloud page, “For the past several years, I’ve used the last hour of my weekly performances at Robert Restaurant to offer some commentary on popular culture through the use of musical juxtaposition—or “mashups”—of various recognizable themes. My aim to create a setting where genre and taste distinctions no longer exist, and all songs—both highbrow and populist—are at long last freed from their cultural coded baggage. It is a time for reflection. It is a time for appreciation. It is a time to play ridiculous mashups and still make tips doing so.”

He even does live concerts online, accepting mashup requests and composing on the spot in response to requests from Twitter users.

The songs were recorded live at Robert Restaurant in New York City after his regular sets, and eloquently illustrate why it’s always worth sticking around till closing time.