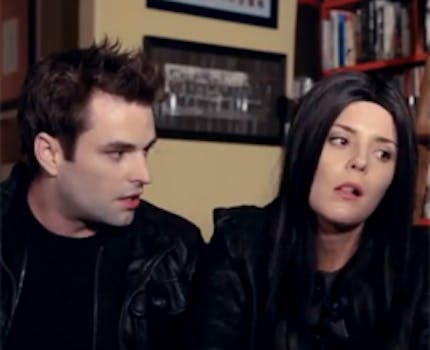 If you're into either Edward Cullen or Mr. Darcy, you'll want to watch this one.

What’s Trending, a YouTube channel devoted to tracking what, and who, are big on YouTube, paid a tongue-in-cheek homage to two fandoms at once with a special episode of The Bella Cullen Diaries yesterday.

Opening today in the U.S., the oft-mocked Twilight finale is sure to incur lots of parody sketches. What’s Trending got in on the game early with a skit done in the style of the popular Lizzie Bennet Diaries, a transmedia retelling of Pride and Prejudice.  The four-minute clip features YouTube celeb Grace Helbig (Daily Grace) as Bella, Chris Thompson (Sup Ricky) as Edward, Taryn Southern as Rosalie, and Lizzie Bennet’s Christopher Sean as Jacob.

Though short, the sketch finds plenty of things to parody in the popular Twilight novels and films: Bella’s emo mannerisms, Edward’s creepster behavior, and, of course, the truly WTF moments in the plot of the final novel—caesarean section by teeth, and Jacob imprinting on the baby. (If you don’t know, trust us, you don’t want to ask).

Watch the sketch below: