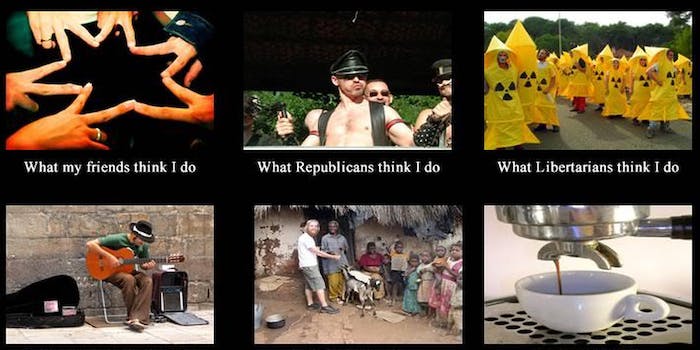 Rob McNealy's six-panel Facebook meme originally challenged stereotypes about the two-party political system. But it's quickly spread beyond that.

Perception and reality can differ, and it’s a rare person who sees himself the same way others see him. A popular new Facebook meme is based on that, and if you have an account and checked your feed in the past two days, there’s a good chance you’ve seen either an example of Rob McNealy’s work—or a parody of it.

On Monday, McNealy started a photo album called “The Two Party System is a Scam.” So far it has four entries, and in the two days since he first posted it, the album or the individual photos therein collected close to 40,000 likes and almost as many shares. (The first three entries are named “Libertarian, Republican,” and “Democrat.” The overwhelming majority of the likes and shares come from the “Homeschooling” poster, the most recent of the four.)

All four entries have an easy-to-imitate format: six photo-images against a black background. For the three political-party entries, the first of the six photos is captioned “What my friends think I do,” followed by “What [members of other political parties] think I do.” The final three are “What my mom thinks I do,” “What I think I do” and “What I really do.”

Each collection is based on self-deprecating humor. The Republican poster, for example, has four “what other people think” images showing abortion-clinic protests, Fred Phelps family members carrying “God Hates Fags” signs, an abusive cop beating a helpless protester, and praying hands over an open Bible. “What I think I do,” by contrast, shows the iconic image of U.S. Marines planting the flag on Iwo Jima, and “What I really do” shows a shirtless guy holding a gun and living in a trailer park.

Democrats fare no better: four images of none-too-flattering left-wing stereotypes. “What I think I do” shows a noble Peace Corps-type American helping an impoverished African village, and “What I Really Do” shows a designer coffee machine.

Since then McNealy’s idea has taken off and spawned countless parodies. Literally countless, as the exact number isn’t known. (Which ones, or how many, you see on your own Facebook page depends entirely on what your friends choose to post on their own walls, like this one for Occupy protesters and New York Knicks breakout star Jeremy Lin.

On the group page Tango Social Club, (a small page for tango dancers in and around Montreal, with under 300 likes,) member Kristin Berg posted her own parody labeled “Tangueras” (tango dancers). The four images of “What other people think” and “What I think I do” all show suave, attractive dancing couples, while “What I Really Do” shows an elegant woman sitting alone and looking wistful. Despite its niche subject matter, it’s garnered over 1,000 likes and almost 500 shares.

John Charles Smith liked McNealy’s original “Libertarian” poster so much he made his own (with over 800 shares and 1,400 likes). “Other people” imagine his Libertarians as tinfoil-hat wearers, the Unabomber, and worse; “What I really do” is shout through a megaphone at a brick wall.

But a random sampling of comments on McNealy’s original Facebook posts suggests that not everyone enjoys the laughs at their own group’s expense. On the “Republican” poster, commenter Jonathan Cleghorn (from Bob Jones University, according to his profile), said regarding the “Republican” poster “Wow. You’re obviously a very bitter democrat. Sorry.”

“Democrat” commenters were both fewer and mellower. Jenks Lavar simply said “this is AWESOME hahahaha.”

The “Libertarian” poster has over 200 comments, some praising McNealy’s original work and several arguing with each other about different forms of Libertarian political philosophy.

The“Homeschooling” poster is exponentially more popular than the previous three combined: over 35,000 likes, 20,000 shares and 3,500 comments. The poster shows, among other things, a picture of a Hitler Youth rally with the caption “What public schools think we do.”

When commenter Lori Matthews saw that, she protested: “As a public school teacher … we do not think that!”

Update: As noted in this follow-up by the Daily Dot, the “What People Think I Do” meme cannot be fully attributed to Rob McNealy, though his series contributed to its popularity. 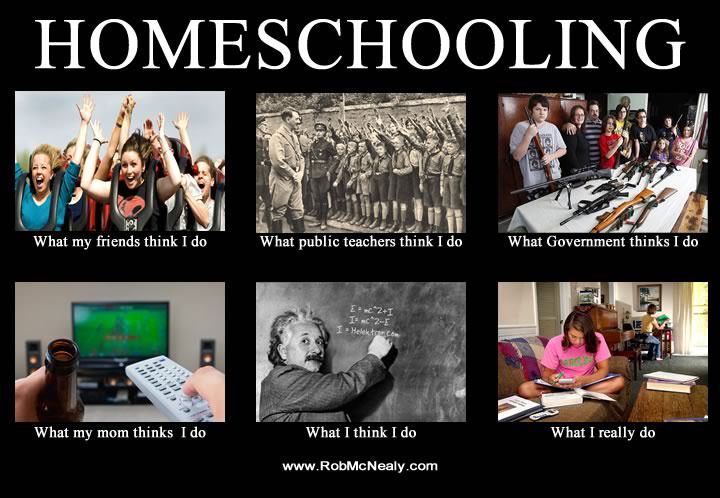