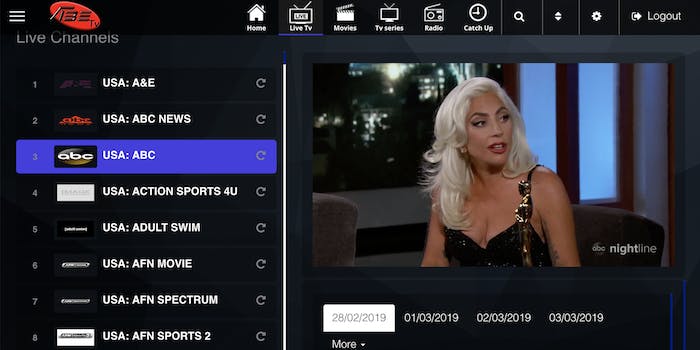 Once you experience the freedom and lower cost of streaming TV, it’s hard to go back to cable. But even in a world with DirecTV Now, PlayStation Vue, and Sling TV, people will always search for new options. One new streaming platform, Vibe TV, has started to get some attention thanks to its low cost and seemingly endless options. After using Vibe TV for a few days, two things have become abundantly clear: It’s an incredible service, and it sure seems like it will be sued out of existence.

What is Vibe TV?

Normally, IPTV services are kept a secret to everyone but their users. What’s odd about Vibe TV, however, is that it operates in the sunlight. It has live customer support via Facebook and a social media presence. Anyone who knows about it can sign up without a referral.

Once you sign up, Vibe TV shows its real charms, offering over 2,000 channels as advertised. From 24/7 streams of shows like Family Guy to PPV events to complete cable packages from multiple countries, Vibe TV has it all.

How does Vibe TV work?

Vibe TV is very much a new DIY service, so it lacks much of the automation you’ve come to expect from signing up for an app. Users pick their plan, starting at $15 per month for streaming on one device. Additional devices can be added for $5 per month. Once you’ve signed up for your subscription and made your user account, it’s time to wait. Vibe TV will manually set up your account and email your password within 24 hours.

Once inside the Vibe TV app, content is divided into sections: Live TV, Movies, TV series, Radio, and Catch Up. Each section has multiple subcategories. Live TV lets you pick channel listings by country, Movies let you sort titles by genre, and TV series lists available shows, etc. When you want to watch a channel, you simply select it from the menu. If it has content streaming, the video will automatically play.

Most users will want to watch via web browser, though. I was able to get an IPTV app working on an Android media player, but it took several tries, even using Vibe TV’s tutorials. Using the browser, on the other hand, was quick and easy, whether on a laptop or an Xbox One. That’s right: Vibe TV’s app can be streamed on the Xbox One browser. (The lack of support for traditional streaming players and the need to use a browser, even on a console, is the only nonlegal strike against Vibe TV.)

The on-demand movie selection on Vibe TV is just as stuffed, though more immediately problematic. Users of the now-dead Popcorn Time app will immediately recognize the format of the movie section. The platform boasts row after row of recent blockbusters, from Aquaman to Bohemian Rhapsody, ready to stream with the click of a button—even ones that are not yet available to rent or own, let alone stream on other major service providers.

Maybe Vibe TV’s ownership was able to negotiate the best contracts in the world with every major network, studio, and premium channel on Earth—and do so without anyone really noticing. But let’s be real: Something like this can’t exist without breaking some rules—especially at just $15 per month. Sure, there are legit free live TV services like Pluto TV, but that one, in particular, is now owned by Viacom and part of a larger digital strategy. But there’s nothing like that to justify Vibe TV’s price point.

If it wasn’t already obvious, the dead giveaway is the subscription sports offerings: NBA League Pass, NFL Sunday Ticket, UFC Fight Pass, and NHL Center Ice, all of which are supposedly included. All of those services cost more than $15 per month on their own, with the noted exception of UFC Fight Pass, which runs just $9.99 per month.

In the past, watching pirated content required viewers to be technologically savvy. You had to figure out how to find torrents, use a client, and mask your use with a VPN or risk getting caught. Now, thanks to services like Vibe TV, users might not even know they’re committing piracy. The subscription component adds an element of legitimacy, as does the friendly and professional live customer support.

Vibe TV’s product is solid, from the interface to how it works. Juggling multiple streaming apps and a streaming TV subscription is a pain, so I understand the appeal of getting everything under one banner. If Vibe TV was legal, I’d subscribe. But the old adage rings true here: If something seems too good to be true, it probably is.