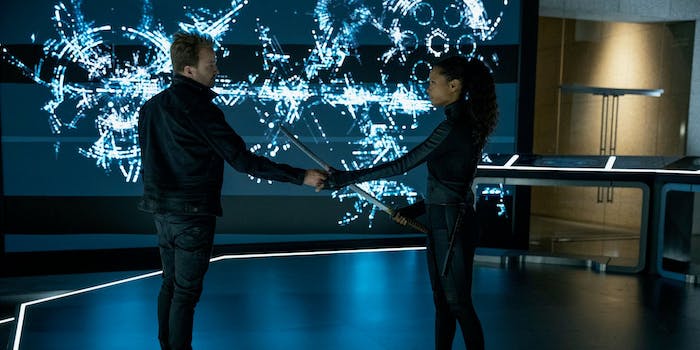 ‘Westworld’ creators push back on reports of 6 seasons

They don't even know how much time they'll need to tell their story.

A couple of weeks ago, HBO renewed Westworld for a fourth season, which surprised some fans who had given up on the show or thought that Westworld’s third season would be the show’s last. But after a report revealed a potential stipulation could mean up to three more seasons of Westworld, the show’s creators are clarifying parts of their game plan.

The initial belief that Westworld could continue all the way up to season 6 came from The Hollywood Reporter’s article on the Westworld season 4 renewal. In giving context to the renewal, The Hollywood Reporter noted that Westworld creators Jonathan Nolan and Lisa Joy had a nine-figure deal with Amazon and that HBO renewed the series partially because it had already paid Nolan and Joy all the way up to a potential sixth season of Westworld as part of that Amazon deal.

But the idea that Nolan and Joy had planned a six-season run of Westworld has persisted for years thanks to comments that James Marsden (who starred in the show’s first two seasons as the host Teddy) made ahead of season 1. Marsden framed the delay in production for season 1 as ultimately a good thing, noting that there was a longer plan being formed.

“It wasn’t about getting the first 10 [episodes] done, it was about mapping out what the next 5 or 6 years are going to be,” Marsden told Entertainment Weekly in 2016. “We wanted everything in line so that when the very last episode airs and we have our show finale, five or seven years down the line, we knew how it was going to end the first season — that’s the way Jonah and [executive producer J.J. Abrams] operate. They’re making sure all the ducks are in the row.”

But now that at least season 3 is in the rearview mirror, Nolan is saying in a new interview with Variety that he and Joy never set how many seasons Westworld would be in stone because “I think you’d be foolish to”; Joy compared limiting themselves to telling the story they wanted in so many seasons akin to setting a page count when writing a novel.

“Things change, circumstances change,” Nolan explained. “I think when we sat down to do the show, we didn’t quite realize how difficult it would be to make this show — [laughing] how many years it would take per season. So we’ve never actually talked about how many seasons that plan was, and indeed I think when we had the plan it didn’t actually map out to a specific number of seasons, exactly. It was a beginning, a middle and an end.”

As Nolan elaborated, it’s more about making sure you tell the story you want to with enough room to do so while being conscious about not overstaying your welcome or wasting the time of its talented cast in what’s likely the finest of balancing acts.

At the end of Westworld’s third season, the show is in a perfect position to reinvent itself once again. But will it be the final time? That’s something we’ll have to wait and see whenever the fourth season comes our way.