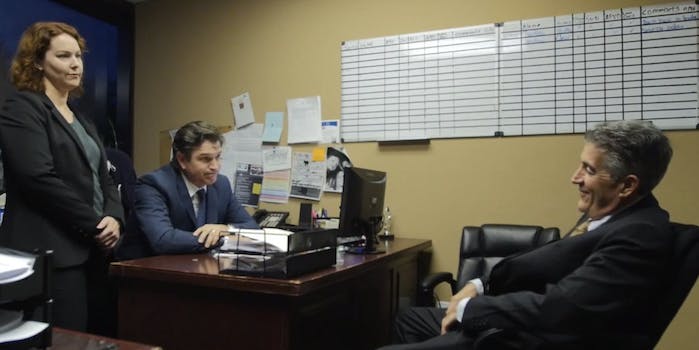 Webseries hopes to beat Johnny Depp to audiences with its account of Whitey Bulger's story.

Whitey is a story loaded with drama, salvation, redemption, crime, brutal fighting, and integrity. The show, with half of the planned 18-episode run online, is pretty good as well.

Jeff Hennessy, creator/writer/star of Whitey is a character in every sense of the word—and a truly talented one at that. A conversation with Hennessy takes you from Southie Boston to the squared kickboxing circles of South America to regular Alcoholic Anonymous meetings. Out of this meandering path came a webseries about one of America’s most notorious and colorful criminals, Whitey Bulger. The series, rooted in the true story of one of Boston’s more celebrated racketeers, uses true facts as the ballast but branches out into many “what if” scenarios over the course of the series.

“It is fictionalized reality,” Hennessy told the Daily Dot. “I took creative license to make this mine as well as Whitey’s.”

The initial eight episodes accurately portray the cat-and-mouse game that is Bulger’s life. He’s currently serving two consecutive life sentences in prison, but Bulger was often noted as a clever sort who worked both sides of the law, serving as an informant for the FBI in its attempt to bring down a prominent Mafia family. That storyline, carefully captured but slightly embellished, is the prominent theme that adds some unexpected twists and turns to the series.

The release of Whitey is timed to take advantage of the buzz surrounding the scheduled September release of Black Mass, the big-budget Johnny Depp film that offers a big-screen account of Bulger’s life. Hennessy said character actor Donald Watson, who stars as Bulger in the webseries, “will blow Johnny Depp out of the water.” While lacking the pedigree and award hardware of Depp, Watson’s brashness and manic ruddiness makes him the perfect Southie going through life with a large chip on his shoulder.

Whitey comes out of the gate with a familiar ring to it, grabbing a few notes from Jack Nicholson’s performance from The Departed and the good-versus-evil dichotomy that was a strong element in the 2010 Ben Affleck film The Town. The production is a little rough in spots—for example, the locations used as FBI headquarters don’t ring true—but the writing and acting are both strong, especially for the webseries genre.

As captivating as the on-screen action may be, the behind-the-scenes story is equally compelling. Hennessy is quick to point out that one of his missions was to use actors whom he’d met through his attendance at Alcoholics Anonymous meetings. The show’s creator said that the network of experienced TV and film veterans he met through AA and Beverly Hills Playhouse (not to mention word of mouth) has grown so quickly that Hennessy realized “I am the rookie in the bunch.”

Hennessy’s view of the future for Whitey is fluid and could take him—and his project—in several different directions. The initial episodes were self-funded, but Hennessy has added a PayPal link to encourage fans to donate to keep the series going. He said there is enough material to do 50 episodes, and he sees no end in site for his show. That said, L.A. resident Hennessy says he can see himself being approached by literary and theatrical agents with some writing and acting opportunities. In terms of his own path, Whitey is powerful proof that Hennessy has what it takes to helm a major project.

As characters go, Jeff Hennessy is an original. He prides himself on giving others a second chance with a dual commitment to his own sobriety and a future as an actor and writer. As with Bulger’s story, Hennessy is a bit bigger than life. Luckily, the webseries creator has more altruistic motives in mind for his future work, as he hopes to gain fame for good deeds and a goal of continued salvation.