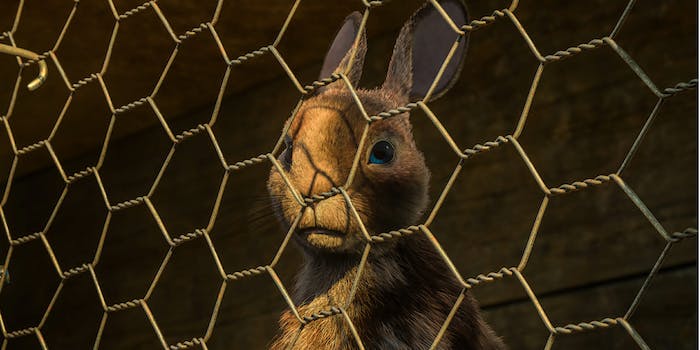 It's a surprisingly dark story about rabbits.

If you have a memory of the 1978 animated movie Watership Down, it’s probably a dark one—a lot of sweet rabbits are maimed and killed and there are bigger themes of environmental collapse and decay. The film, adapted from Richard Adams’ 1972 novel, affected a whole generation of kids and adults, but Adams’ daughters are revisiting its generational meaning ahead of a new Netflix/BBC adaptation.

In a recent interview, daughters Rosamond and Juliet claimed that the book was always “just a story about rabbits.” However, producer Rory Aitken told the Telegraph that the series, which debuts Dec. 23, is “clearly not appropriate for younger children.”

Reviews of the series have struggled with the scary/not scary enough dynamic. Den of Geek’s Catherine Pearson writes: “There are scenes in the series that positively shriek of folk classics like The Blood On Satan’s Claw and The Wicker Man, with the visuals of the natural world and the unnaturally cruel acts of other rabbits suggesting that there is something rotten and evil within the earth itself, perhaps even a powerful force that is worth worshipping to save oneself from the danger and death that lies outside the burrow.” The Independent‘s Ed Power, however, claims the series “simply isn’t scary enough.”

Adams’ daughters also recalled the letters their father received from fans offering their own theories about characters. Says Rosamond: “It shows that people really connect with the story, they really think hard about it, but it cut no ice with Dad. ‘Rubbish!’ he always said. ‘It’s just a story about rabbits.'”