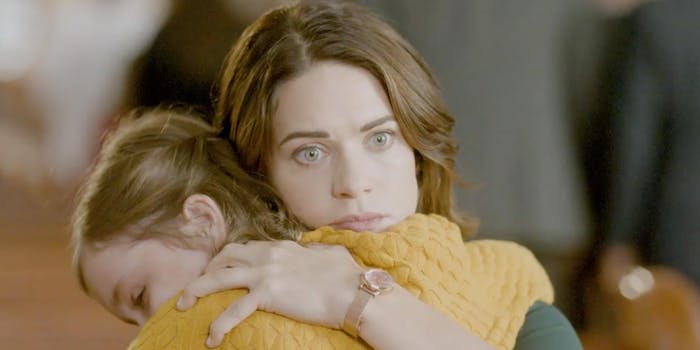 How to watch ‘You Can’t Take My Daughter’

A mother fights her rapist for custody of their child.

Vibrant law student Amy Thompson is attacked and raped by a friend of a friend. After discovering she is pregnant, she decides to keep the baby, even though her rapist Demitri continues to stalk her while she waits for a trial. Fed up with waiting for the system, she flees to Atlanta to start over with her daughter.

Six years later, Demitri tracks her down, and in an act of abject horror, sues for custody of their daughter. Now, Amy must use all her own legal and investigative skills to fight back and keep her daughter safe from the monster who would dare take her away.

Here’s everything you need to know to watch You Can’t Take My Daughter.

When does You Can’t Take My Daughter air?

You Can’t Take My Daughter premieres on Saturday, February 15, at 8pm ET.

What channel is You Can’t Take My Daughter on?

You Can’t Take My Daughter airs on Lifetime.

How to watch You Can’t Take My Daughter

You Can’t Take My Daughter is available for on-demand viewing on Lifetime’s site and the Lifetime app, which is available on Roku, Apple TV, Google Chromecast, Amazon Fire Stick, Android TV,  and iOS and Android devices. To watch, you’ll need a cable or live TV streaming subscription. Here are your best options, all of which offer at least a one-week free trial, which should be plenty of time to finish the series.

Philo is the least expensive streaming service, but it has some limitations. You won’t find the sports channels that dominate other packages or local channels. However, it’s the cheapest way to gain access to Lifetime at only $20 a month. You will also find the best deal on popular channels like Animal Planet, IFC, AMC, Lifetime, and even deep cuts like ID. You also get free cloud DVR, but shows recorded are deleted after 30 days, so binge responsibly.