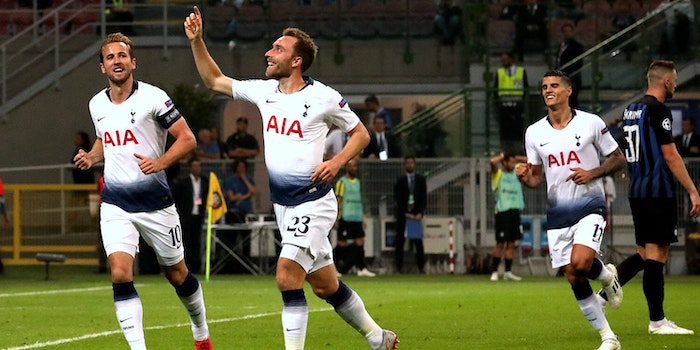 How to stream Tottenham Hotspur vs. Southampton

Spurs will look to rebound from a Premier League loss and a surprising Carabao Cup exit.

It’s been a rough week for Tottenham Hotspur. First came a 2-1 loss to Leicester City that included a VAR decision many Spurs fans felt was unfair. Then, in the Carabao Cup, a squad with some legitimate Spurs first-teamers lost to Colchester on penalty kicks to be eliminated from that competition. Can they get their mojo back at home on Saturday against Southampton?

Here’s everything you need to know to live stream Tottenham Hotspur vs. Southampton, including what to watch for on the pitch.

If you want access to Tottenham Hotspur vs. Southampton as well as every Premier League game this season, you’ll want an NBC Sports Gold subscription. At the Matchday Pass tier, for $39.99, you get access to 140 exclusive live matches, with at least four for each of the 20 clubs. The Premier League Pass option gives you an option to replay matches, in case you can’t catch a match live, and offers additional programming, including analysis and highlights. NBC Sports Gold offers additional packages for fans who want to follow rugby action, the PGA tour, Indy Car racing, cycling, and lacrosse.

Tottenham Hotspur vs. Southampton: What to watch for

Assuming the Carabao Cup loss was a fluke, Spurs fans still have reason to be concerned. Since winning on opening day, they’ve only won one of the next five, though they also have a pair of respectable draws to Man City and Arsenal in that string. Harry Kane’s goal last week showed tenacity and awareness, as he was knocked over in front of goal but managed to score from a prone position. But Tottenham will need more of that from him and others.

Southampton, meanwhile, lost 3-1 last weekend to Bournemouth to drop to 13th in the table. The team did, however, string together three straight results before that, including a draw with Manchester United. (And, to their credit, they got through the latest round of the Carabao Cup unscathed, with a 4-0 win over Pompey.)