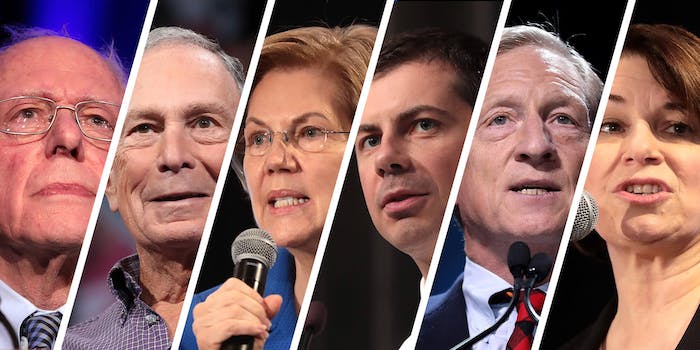 The upcoming South Carolina primary is big for several candidates.

The 10th 2020 Democratic presidential debate will take place Tuesday night in South Carolina, and it comes off a heated debate last week that saw a number of back-and-forths between the candidates.

It will also be a major stage for the candidates to make their pitch ahead of South Carolina’s primary later this week. After Sen. Bernie Sanders (I-Vt.) won Nevada’s caucuses—adding to his early momentum in the nomination process—a win in South Carolina for any other candidate could give them staying power in the race.

Seven candidates will take the stage tonight. Here’s what you need to know about, and how to watch, tonight’s 2020 Democratic presidential debate online.

What time is the South Carolina 2020 Democratic debate?

The debate will begin at 7pm CT at the Gaillard Center in Charleston, South Carolina. It is being hosted by CBS News and the Congressional Black Caucus Institute.

It will be moderated by CBS Evening News anchor Norah O’Donell and CBS This Morning co-host Gale King. Others joining the questioning of the candidates include Margaret Brennan, the moderate of Face the Nation, Major Garrett, a CBS Washington correspondent, and Bill Whitaker, a 60 Minutes correspondent.

Which candidates are in the South Carolina debate?

Seven candidates have qualified for the debate. They include:

Rep. Tulsi Gabbard (D-Hawaii), who is still running for the party’s nomination, did not qualify for the debate.

How to watch the South Carolina 2020 Democratic presidential debate

The debate will be streamed on CBSN, CBS News’ streaming service, and will also appear on BET and CBS.

CBS News is also streaming the debate on its YouTube page. You can watch it here, or below.

How to stream the South Carolina 2020 Democratic presidential debate

But AirTV—which has no monthly fee—serves to strengthen one of Sling’s biggest weaknesses compared to other live streaming services. It’s the only way to watch the Democratic debate using Sling TV.

CBS All Access is the network’s answer to Netflix and Hulu. With it, you’ll be able to live stream CBS and the 2019 Grammy Awards. Plus, there are 10,000 episodes of CBS television to binge, including hit shows The Big Bang Theory, Big Brother, and of course, the Democratic debate. You’ll also be able to stream CBS All Access exclusives like Star Trek: Discovery.