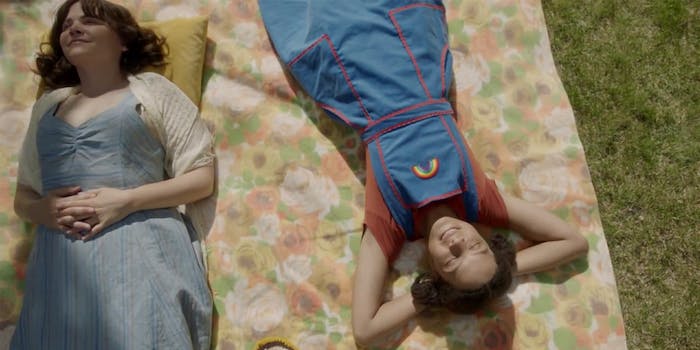 Watch ‘I Am Somebody’s Child: The Regina Louise Story’ for free

The foster system failed her, but one woman's kindness didn't.

Regina Louise may not be a name known to you, but her story of struggle is ubiquitous to anyone who’s ever navigated the broken US foster system. I Am Somebody’s Child tells the emotional story of her tenacity and faith as she faced a corrupt system and came out victorious.

As a young African-American girl, Louise was placed in more than 30 foster homes and psychiatric care facilities before age 18. At age 13, she developed a special bond at one of the shelters with a counselor named Jeanne Kerr, a white woman who finally believes in Louise and tries to adopt her. Unfortunately, a racially motivated ruling forced them apart.

The two reconnect decades later, when Kerr is finally able to adopt Louise in the very courthouse that denied them in 1977. Based on a real, heartbreaking story, I Am Somebody’s Child is the kind of tearjerker you’d expect from Lifetime. Newcomer Angela Fairley will star as Regina Louise, with Once Upon A Time star Ginnifer Goodwin playing Jeanne Kerr.

Here’s everything you need to know to watch I Am Somebody’s Child: The Regina Lousie Story online for free.

I Am Somebody’s Child: The Regina Louise Story cast

When does I Am Somebody’s Child air?

The made-for-TV movie I Am Somebody’s Child: The Regina Louise Story premieres on Saturday, April 20, at 8pm ET.

What channel is I Am Somebody’s Child: The Regina Louise Story on?

I Am Somebody’s Child airs on Lifetime, so you can practically guarantee waterworks.

How to watch I Am Somebody’s Child: The Regina Louise Story for free

Lifetime is available on a handful of the major live TV streaming services. When trying to decide which one is best for you, you’ll want to weigh the cost, the other channels you’ll receive, and the compatible devices for streaming. Thankfully, no matter which service you pick, you’ll start with a one-week trial, so you can watch I Am Somebody’s Child: The Regina Louise Story for free.

For a more à la carte service, look to Sling TV. It offers two cable packages, Sling Orange and Sling Blue, both of which cost $25 per month. Lifetime is available in either Sling package. If you grab them both (Sling Orange + Blue) you can save $10 per month. If you need to choose, Sling Blue offers more bang for your buck with over 40 channels, including sports necessities like FS1, NBCSN, and NFL Network. You’ll also gain access to the usual cable mainstays like Food Network, Discovery, Cartoon Network, SYFY, and FXX. Here’s the complete guide to Sling TV channels.

Philo is the least expensive streaming service, but it has some limitations. You won’t find the sports channels that dominate other packages or local channels. However, it’s the cheapest way to gain access to Lifetime at only $16 a month. You will also find the best deal on popular channels like Animal Planet, AMC, and even deep cuts like IFC and ID. You also get free cloud DVR, but shows recorded are deleted after 30 days, so binge responsibly.

Many cable channels let you live stream directly from their site, and Lifetime is no different. Simply go to the channel’s website, select a video to watch, and them fill in your login information from the above services when prompted. Unfortunately, Sling TV won’t work for this.

If you want to stream I Am Somebody’s Child: The Regina Louise Story on the move, we suggest downloading the Lifetime app. The same login from the website will work here to watch new episodes of Lifetime shows and movies.