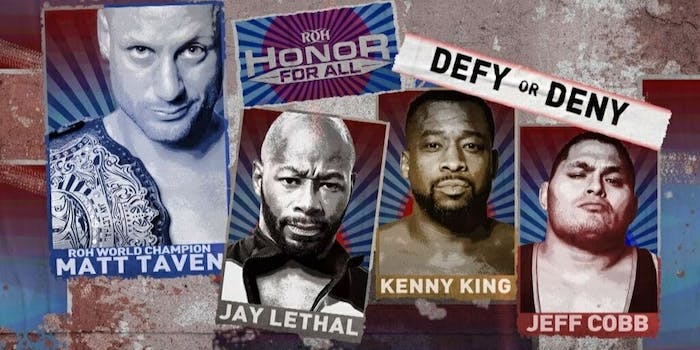 How to stream ROH Wrestling’s Honor For All

Matt Taven has been Ring of Honor’s world champion for the past four months, and after beating Alex Shelley at the ROH Summer Supercard earlier this month, he finally gets a breather heading into Sunday’s Honor For All PPV. Well, he’s still fighting, but his title won’t be on the line in the pro wrestling card you can live stream on Fite TV.

That’s the good news. The bad news is that Taven still must battle three other opponents at the same time. That means Jay Lethal, Jeff Cobb, and Kenny King will get to inflict their pain against Taven in a Defy or Deny match.

The Defy or Deny rules stipulate that if any of the three opponents beat Taven on Sunday, they’ll get a title shot vs. Taven in the future. If nobody beat Tavens, the last person to be pinned by him forfeits the chance to compete for the belt as long as Taven still holds the strap. So, these are high stakes for his opponents.

This isn’t the first time Taven has been in a four-way match like this. In June, he took on PCO, Mark Haskins, and Flip Gordon at State of the Art, and after they were all dispatched and Taven pinned Gordon to end the festivities, it was declared that Gordon wouldn’t get a title shot as long as Taven is the champ. Now, we’ll see if somebody else can cement their chance to beat Taven for the title.

On the undercard, WWE Hall of Famers (and legendary 1980s babyfaces) Rock ‘N’ Roll Express will meet The Briscoes for the world tag team championship. For Ricky Morton and Robert Gibson—who are both in their 60s and at least three decades past their primes—this will be the first time they’ve competed for the ROH straps.

In other action, Lifeblood will face Villain Enterprises for the six-man championship, while Shane Taylor will take on an unknown opponent for his world television title.

Here’s everything you need to know to watch the ROH’s Honor For All live stream.

ROH Honor For All

Honor For All live stream: How to watch online

The best way to watch these the Ring of Honor wrestlers compete on Honor For All is through Fite TV.

Since it’s a PPV, there’s no legal way to get around the $9.99 fee to watch the card. But Fite TV (you can sign up here) has you covered. Fite TV is available on services like Roku, Apple TV, Amazon Fire Stick, PlayStation 4, Xbox One, Android and iOS devices, desktop and laptop computers, and smart TVs.

Honor For All fight schedule