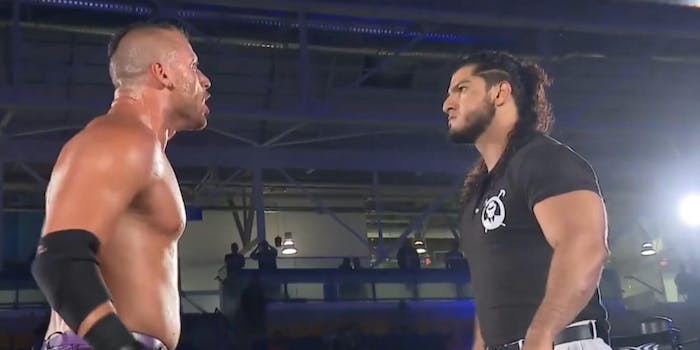 How to stream ROH Wrestling’s Death Before Dishonor

The Matt Taven vs. Rush world title match should be spectacular.

Since making his debut for Ring of Honor last December, Rush has not been pinned or forced to submit. But ROH champion Matt Taven has plenty of experience in dealing elite wrestlers their first pinfall defeats. After all, Taven has already done it to PCO and Jeff Cobb.

Now, the world titlist will get to a chance to put a stain on yet another wrestler’s spotless record when Taven faces Rush in the main event of ROH’s Death Before Dishonor, a PPV card that you can live stream on Fite TV on Friday night.

For Taven, who has held the ROH’s top belt since April, his experiences facing Rush in numerous matches in Mexico have led him to this conclusion.

“Rush is one of the most hard-hitting superstars that we have, not just in Ring of Honor but in all the world,” Taven told Slam! Wrestling. “If anyone is familiar with the stuff that we did in Mexico, they would know that the two of us when we get in the ring together, we are going full steam at one another. It’s definitely a hard-hitting match, a little less finesse and a little more in your face intensity. Wrestling is all about longevity and legacy. Working as hard as I did and having that moment finally happen, it’s going to be over my dead body that I’m going to let it end in Las Vegas.”

Already, ROH is looking for the next opponent for the world champion, whether it’s Taven or Rush that survives Friday’s main event. Earlier on the PPV card, Kenny King will face PCO and Colt Cabana will meet Marty Scurll in first-round matches in a tournament that will determine the opponent of the champ at December’s ROH Final Battle PPV card. Also, Cobb, by virtue of his victory at last month’s Defy or Deny match, will get his shot at the belt at some point in the future.

In other important matches on the Death Before Dishonor card, the Briscoes will defend their tag team championships vs. Lifeblood; Shane Gordon will have to battle Flip Gordon and Tracy Williams for his television title; and Angelina Love will try to beat Kelly Klein for the women’s belt.

Here’s everything you need to know to watch the ROH’s Death Before Dishonor live stream.

Death Before Dishonor live stream: How to watch online

The best way to watch these Ring of Honor wrestlers compete on Death Before Dishonor is through Fite TV.

Since it’s a PPV, there’s no legal way to get around the $34.99 fee to watch the card. But Fite TV (you can sign up here) has you covered. Fite TV is available on services like Roku, Apple TV, Amazon Fire Stick, PlayStation 4, Xbox One, Android and iOS devices, desktop and laptop computers, and smart TVs.