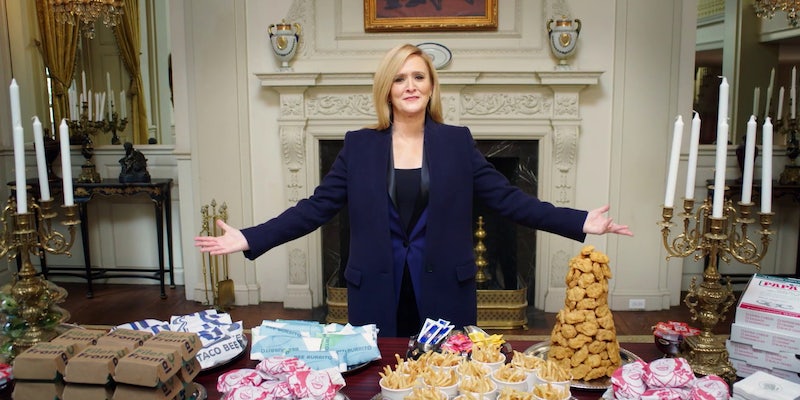 How to watch ‘Not the White House Correspondents’ Dinner’ for free

Samantha Bee is back and ready to roast.

It’s easy to crack jokes about the Trump administration and current political and social landscape, but few do it better—or with more bite—than Samantha Bee. As the White House Press Corps gathers at the official Correspondents’ Dinner without the president or any comedians this year, Bee will throw her own unofficial event on TBS.

For the second year in a row, the late-night talk show host’s Not the White House Correspondents Dinner will take aim at the current administration and members of the media in the trenches. You can expect some riffs on the First Amendment as well. It’s the perfect alternative to flipping on C-SPAN, and proceeds will Committee to Protect Journalists, a non-profit that works to protect press freedom worldwide.

Here’s everything you need to know to watch Not the White House Correspondents’ Dinner online for free.

When does Not the White House Correspondents’ Dinner air?

What channel is Not the White House Correspondents’ Dinner on?

Not the White House Correspondents’ Dinner will be televised on TBS.

How to watch Not the White House Correspondents’ Dinner for free

TBS is available on a handful of the major live TV streaming services. When trying to decide which one is best for you, you’ll want to weigh the cost, the other channels you’ll receive, and the compatible devices for streaming. Thankfully, no matter which service you pick, you’ll start with a one-week trial, so you can watch Not the White House Correspondents’ Dinner for free.

For a more à la carte service, look to Sling TV. It offers two cable packages, Sling Orange and Sling Blue, both of which cost $25 per month. TBS is available on either package. If you grab them both (Sling Orange + Blue) you can save $10 per month. But if you just want to choose one, Sling Blue offers more bang for your buck with over 40 channels, including sports necessities like FS1, NBCSN, and NFL Network. You’ll also gain access to the usual cable mainstays like Food Network, Discovery, Cartoon Network, SYFY, and FXX. Here’s the complete guide to Sling TV channels.

If you have a PS4 and are into the idea of having your gaming and streaming needs met in the same place, PlayStation Vue is made for you. Still, you don’t need a PS4 to enjoy this service. You can also use a Roku, Amazon Fire devices, and even Kodi. In addition to TBS, access channels like AMC, BBC America, and Bravo in PlayStation Vue’s entry-level package. One subscription works with up to five devices and provides unlimited cloud DVR storage, which makes it one of the most binge-friendly solutions. (Here are all of PlayStation Vue channels.)

Other ways to watch the Not the White House Correspondents’ Dinner

Samantha Bee hosted one Not the White House Correspondents Dinner in 2017. If you want to watch that special, it will cost $2.99.

Many cable channels let you live stream directly from their site, and TBS is no different. Simply go to the channel’s website, select a video to watch, and them fill in your login information from the above services when prompted. Unfortunately, Sling TV and FuboTV won’t work for this.