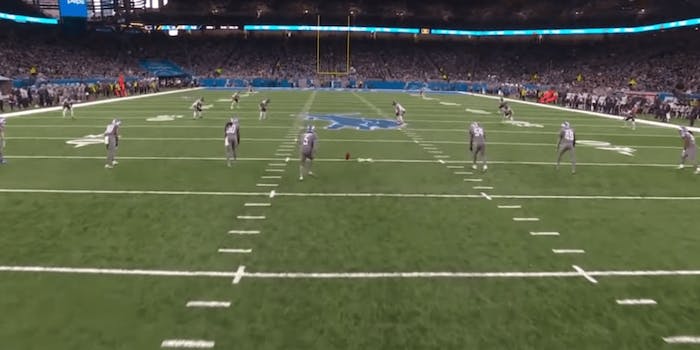 How to watch the NFL Thanksgiving games for free

Don't miss out just because you're stuck with your in-laws.

If you want to watch the NFL Thanksgiving games for free, there are plenty of ways to do it—even if you’re stuck with the in-laws. All three games are being broadcast on network television, so if you’re watching from the comfort of your home, chances are you can pick up the channels with your smart TV or an HD antenna. But if you’ve cut the cord or are looking to stream online, it gets a little more complicated. Not every live TV streaming service offers local channels, and availability can vary within each service varies based on where you’re located. Here’s everything you need to know to live stream NFL Thanksgiving games.

NFL Thanksgiving games live stream: How to watch for free

All of the major TV streaming services offer at least a couple of the major broadcast channels, but not all of them are available live. In those cases, you’ll often get an on-demand version of the channel that lets you watch your favorite shows the morning after they air. Before you choose any of these services, you’ll want to use the included link to check the channel availability in your area. Thankfully, each service comes with a free trial, so you can use the NFL Thanksgiving games as a test run.

What separates Hulu with Live TV from competitors—besides offering six ESPN channels, seven if you include SEC Network—is that each subscription comes with free access to Hulu’s on-demand library. That means that in addition to more than 55 channels of live TV, you can watch most of your favorite shows on-demand, along with movies, documentaries, anime, and Hulu original series. (Here’s the complete list of Hulu Live TV channels.)

Sling TV is typically our top pick for streaming NFL games, but its lackluster options when it comes to local channels makes it difficult to recommend for NFL Thanksgiving games. That said, it’s still the cheapest way to watch NFL RedZone and gives you the most bang for your buck. Right now, Sling TV is also offering new subscribers a free HD antenna, so you can pick up all the games you’re missing the old-fashioned way too. (Here’s a complete guide to Sling TV channels.)

FuboTV is a streaming service that caters specifically to sports fans, with an emphasis on international soccer. In addition to getting access to all four major broadcast channels, a standard package includes NFL Network, which you might need to watch Thursday Night Football, and it’s easy to add NFL RedZone to your package. ESPN is notably missing, but in its place, you’ll get regional sports networks, Big Ten Network, BeIn Sports, and FS1 and FS2. You’ll also get free three-day replay for games and 30 hours of cloud DVR storage. (Here’s the complete FuboTV channels list.)

Like Hulu with Live TV, YouTube TV offers only one basic channel package, and it’s loaded with sports options, including everything you need to stream NFL Thanksgiving games. You’ll also get a couple of college sports networks and specialty channels like NBA TV and MLB Network. If you have roommates, you’ll be glad to know that you can have up to six accounts per household, and each comes with unlimited cloud DVR. (You can find the full list of YouTube TV channels here.)

If you’re having trouble picking up CBS in particular, you can always add CBS All Access to your monthly bills. While it’s best known as the exclusive home of Star Trek: Discovery, CBS All Access also lets you watch your local CBS affiliate live and watch all of its shows, both old and new, on-demand. You can also add CBS All Access as an Amazon Prime channel, which comes with a free seven-day trial.