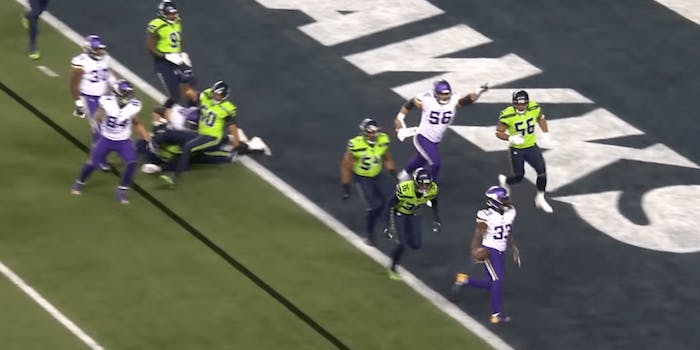 You can stream every game on ESPN this season.

If you want to know how to watch Monday Night Football without cable, you’re still going to need ESPN. There’s no other way around it—at least not legally. But there are several ways you can stream ESPN online, and finding the right service for you will likely boil down to what else you want to watch besides Monday Night Football. (Note: MNF games will not stream on ESPN+, the network’s standalone app that launched earlier this year, but it’s worth a closer look.)

HOW TO STREAM MONDAY NIGHT FOOTBALL

For $10 extra per month, you can get NFL RedZone via the Sling Sports Extra package.

Game-changing feature: Price. If you only care about ESPN, Sling TV is by far your cheapest option.

Hulu with Live TV is exactly what’s advertised: everything you love about Hulu’s on-demand content coupled with 40 channels of live TV. You don’t just get ESPN here—you also get ESPN2, ESPNEWS, and ESPNU, along with FS1 and FS2. The only thing you might miss from your cable package is AMC. For an extra $4 per month, you can upgrade to Hulu with No Commercials.

For NFL fans it’s worth noting that you can’t add NFL Network or NFL RedZone.

Game-changing feature: Every subscription comes with free access to Hulu’s on-demand library, meaning you can catch up on all of your favorite shows. (Here are our picks best movies on Hulu, Hulu documentaries, anime, and the must-see Hulu originals.)

The only downside? You can’t stream via Amazon Fire or add NFL RedZone.