Get started without paying a dime. It’s easy to watch live TV on Roku. From its first device, the Roku DVP, to the high-end Roku Ultra, the Roku ecosystem has constantly evolved to provide the best streaming quality at a cost-effective price. Roku has the largest selection of streaming apps of any device, and it also has the most streaming live TV.

From mainstream services that everyone knows to a few more obscure free channels, Roku is a live streaming TV dream. Here’s everything you need to know to watch live TV on Roku. Hulu with Live TV represents a beautiful middle ground for people familiar with streaming but new to streaming live TV. A Hulu with Live TV membership includes a full package of cable TV channels, along with a traditional Hulu streaming membership. Should you ever get sick of watching live TV, Hulu is waiting for you with more to watch. Not that you’ll run out of content on Hulu with Live TV. Its 50-plus channel package includes everything from Cartoon Network to ESPN, with every major news network to boot. If that wasn’t enough, Hulu with Live TV includes 50 hours of cloud DVR storage and on-demand shows not included with Hulu’s streaming service.

There’s some channel overlap, with both offering mainstays like Cartoon Network, Comedy Central, and CNN. That overlap makes the missing options from each package frustrating. Sling’s Orange package has three ESPN channels and Disney, but not Nat Geo, FX, local channels, FS1, or SyFy. The Blue package, on the other hand, has all of your favorite sports channels—except ESPN. You can solve the problem by getting Sling Orange + Blue. There’s so much overlap that buying both doesn’t feel like it adds much. Still, at just $45 per month for the combo package, getting everything with Sling TV won’t break the bank. (Here’s a complete guide to Sling TV channels.)

FuboTV is an international sports fan’s best friend, a live TV streaming service that offers the best of soccer, NBA, and Formula-1 along with basic cable channels. While you’ll miss out on a few favorites like ESPN, FuboTV includes Bravo, MSNBC, SyFy, History, and other basic cable standards you’ve come to expect. Spanish speakers looking for a cheaper alternative should also consider the Fubo Latino package for $7.99 per month. This package comes with 15 Spanish language channels for a reduced price. If making sure you’ve got access to local channels is important to you, FuboTV deserves an extra look. While it doesn’t include ABC, it offers local NBC, Fox, and CBS channels for most of the U.S. market. Your membership even includes cloud DVR. (Here’s the complete FuboTV channels list.)

If you’re looking for streaming TV on a budget, no service compares to Philo’s 43-channel $16-per-month baseline package. Originally designed for students living in college dorms, Philo’s lineup is light on news, but it packs in some of the best channels in entertainment: AMC, BET, CMT, MTV, Comedy Central, and VH1. Philo comes with on-demand and unlimited DVR, with recordings lasting up to 30 days. No one offers more for less. However, the lack of news beyond BBC World News is frustrating. If you can get by without American news sources, Philo is a steal.

In an oversaturated streaming TV market, YouTube TV sets itself apart by offering unlimited cloud DVR space and access to YouTube Red’s original programming. Its channel selection includes 60-plus channels, with a wide range of basic cable standards like AMC, FX, E!, ESPN, and Fox News. Best of all up to five people can watch simultaneously, with each user getting their own unlimited DVR. The only downside is YouTube TV isn’t available nationwide yet. (To see if you can use YouTube TV, check here.) At $49.99 a month and with unlimited DVR, it’s an incredible deal. (You can find the full list of YouTube TV channels here.) If you’re someone who wants local news but doesn’t want to subscribe to an entire service to watch it, NewsON would like a moment of your time. This free streaming channel allows users to watch their local news broadcast for free on their Roku, no matter how far from home they are. Users can watch their evening news live or after the fact via on-demand. News fiends looking for something beyond local broadcasts should give Haystack TV a shot. Aggregating local and international news from over 200 sources, HayStack TV offers a steady stream of 24/7 headline news straight to your TV, free of charge. Over time the channel learns what kind of news you watch and will personalize a channel for you. Whether you’re looking for general news or something more specific like science, technology, the weather or business, Haystack TV offers a refreshing change of pace. If all you care about is the evening news, CBS News Live 24/7 is a free solution. The network draws from CBS News from around the world. However, if you look under the Live banner, you can find CBS’ live TV coverage, giving you everything from breaking news to election night coverage. It might not be a full channel, but CBS News Live 24/7 goes live when it matters most. Here’s a wild card for fans of live TV who don’t need name brand channels to have a good time. Pluto TV is a completely free streaming TV service that draws its content from internet streaming stations. Gathering together over 100 channels of news, nature, entertainment, music, and movies, Pluto TV feels just like a normal cable—just without most major channels. That doesn’t mean you won’t find incredible content.

Sports channels include everything from pro-wrestling to MMA and even Fox Sports coverage. You’ll find dozens of movie channels and comedy channels, special blocks for gamers, and incredible amounts of classic TV. There are even food and lifestyle networks. You’ll find live feeds of MSNBC, Bloomberg, NBC News, and more. After over a year of use, I still regularly fire up Pluto TV even with a pay-TV subscription in my monthly bills. If you want a massive TV package without paying a dime, Pluto TV is the only option. (For more, here’s our complete breakdown of how Pluto TV works and Pluto TV channels.) 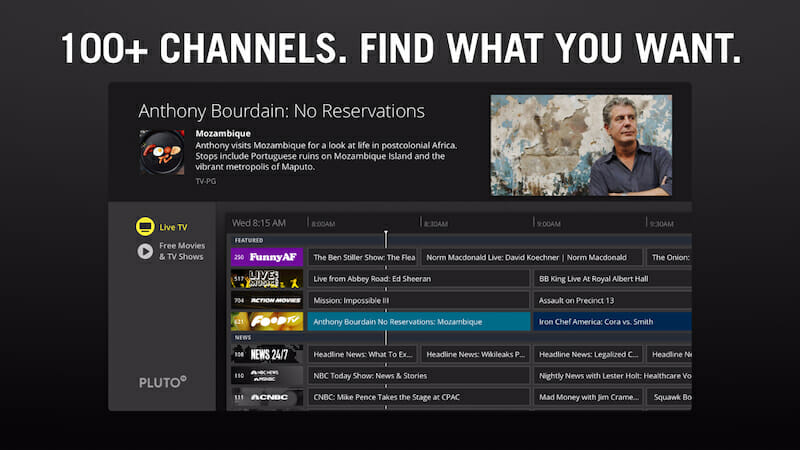