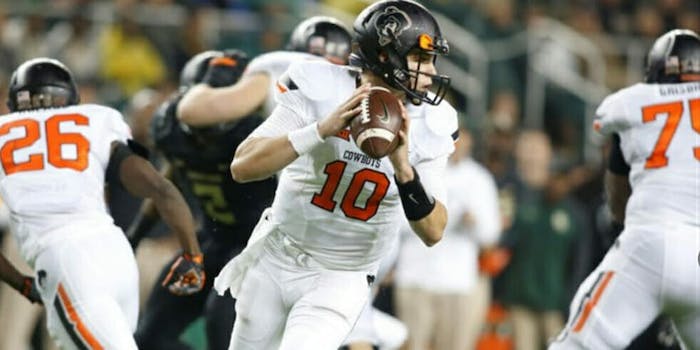 How to watch the Liberty Bowl online for free

The boys are back in town. Former conference rivals Missouri and Oklahoma State rekindle their long history on New Year’s Eve. After the Cowboys looked like college football playoff contenders, OSU fell hard in October but finished a disappointing season playing everyone tough—defeating Texas, West Virginia, and almost Oklahoma. Watch the Liberty Bowl live stream to see how much firepower Mike Gundy’s Pokes bring in this SEC vs. Big 12 scrum.

Liberty Bowl: How to watch online for free

Liberty Bowl: Why it matters

Taylor Cornelius has seen some stuff.

The fifth-year senior backed up Mason Rudolph and finally got the keys to the offense this season after his career was put on hold in Stillwater. At 6’6” and with the hairline of Roy from The Office, he leads with give-no-fucks grit and can hang 40 on anyone. Gundy’s Cowboys love misdirection, run-pass options, and a QB who can lumber forward on a draw when he sees the secondary cleared out in man coverage. It’s why the Cowboys and their 23-year-old QB are in great shape here—you won’t see ’em coming. The Tigers are ranked, from a better conference, and QB Drew Locke is a high-end NFL prospect, but the haters forgot that it’s Cornelius season.