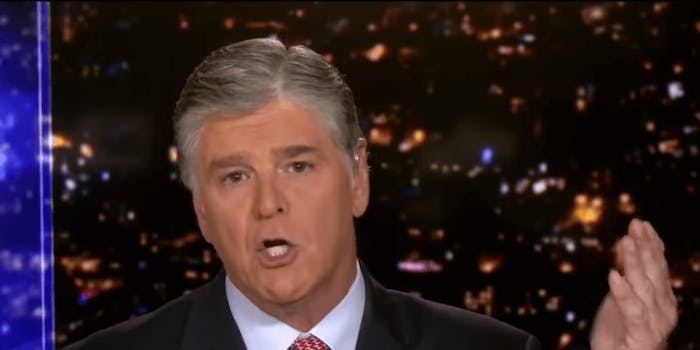 How to watch ‘Hannity’ online

The day's news, straight from the mouth of the conservative firebrand.

Sean Hannity is one of the most prolific voices in talk radio and a Fox News mainstay since the channel’s inception in 1996. After trading punditry jabs with the liberal Alan Colmes on Hannity and Colmes, Hannity went lone wolf with Hannity.

Airing since 2009, Hannity’s hour-long program offers the rundown of whatever is happening in US news, politics, and culture, from the polarizing, conservative firebrand. Every episode is wrought with fiery monologues, insight, pithy political analysis, and occasionally, live coverage of events. There are also interviews with newsmakers like Newt Gingrich, Rush Limbaugh, and Trump. It may be the reason it’s number one in its time slot with no signs of being knocked down.

Here’s everything you need to know to watch Hannity online for free.

When does Hannity air?

What channel is Hannity on?

How to watch Hannity online

Fox News is available on a handful of the major live TV streaming services. When trying to decide which one is best for you, you’ll want to weigh the cost, the other channels you’ll receive, and the compatible devices for streaming. Thankfully, no matter which service you pick, you’ll start with a one-week trial, so you can watch Hannity for free.

Other ways to watch Hannity episodes

Many cable channels let you live stream directly from their site, and Lifetime is no different. Simply go to the channel’s website, select a video to watch, then fill in your login information from the above services when prompted.