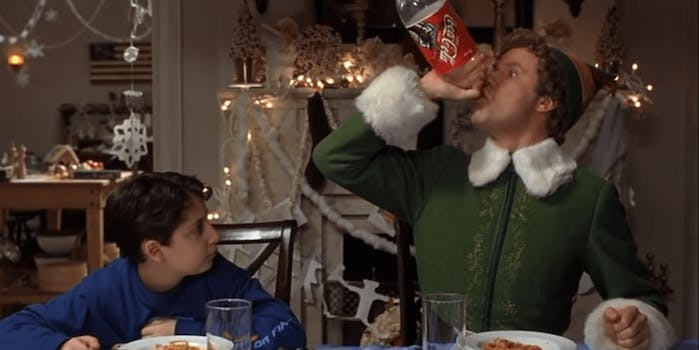 How to watch ‘Elf’ online for free

This guide is chock full of advice. No throne of lies here.

Son of a nutcracker! It’s that time of year again where we all watch Elf, Will Ferrell’s Christmas classic. One of Daily Dot’s best Christmas movies of all-time, the charming film has spawned no small amount of infamous quotes and jokes, to the point where Ferrell turned down more than $20 million to film a sequel. If you’re in need of a good laugh this holiday, look no further. Here’s everything you need to know about how to watch Elf online free.

Though you can’t get it for free with your Prime account, Amazon Video is one of the cheapest and most accessible ways to watch Elf this holiday. All you need is an Amazon account, one of the compatible devices to watch it on, and the free Amazon app downloaded onto that device. It’s worth mentioning that if you really want to watch the bonus features that originally came with the DVD, there’s an option for that, too.

There’s no way of telling if YouTube will eventually revert Elf back to its usual $14.99 price, but logically, it should stay on sale all December. Otherwise, since it’s being offered at the same price as Amazon Video, it’s just a matter of where you prefer to watch your movies.

Since Google Play works on many of the same platforms as its competitors, it’s yet another matter of how you prefer to watch your movies.

It’s a dollar over its competitors if you want to purchase Elf, but the iTunes rental option lists the same price as competitors. The only downside is that iTunes is available on fewer platforms, but as long as you have access to a Mac, PC, or iOS device, you’re good to go.

How to watch an Elf live stream online

Sling TV is split up between two packages (each alone is $30, but you can combine them for $45). AMC (and thus an Elf live stream) is available on both. When it comes to picking your package, it’s mostly a matter of what sports channels you want. ESPN is available on Sling Orange, but Sling Blue has the NBC Sports Network, Fox Sports, and more. Sling also offers lots of add-on packages to help bolster sports and movie streaming options. (Here’s the complete guide to Sling TV channels.)

Aside from renting, Philo is essentially the cheapest way to live stream Elf. And Philo provides plenty of other entertainment, including BBC America, Comedy Central, Discovery, and Hallmark. Notably, having AMC on Philo will also let you upgrade to the ad-free AMC Premiere. (Here’s the complete guide to Philo channels)

FuboTV is one of the best values for streaming sports content in addition to entertainment options like AMC, which will get you an Elf live stream. FuboTV’s basic package includes NFL Network and NBA TV. One of the best for Spanish or Portuguese-speaking viewers, the streaming service also offers multiple foreign language packages. (Here’s the complete guide to FuboTV channels.)

YouTube TV is a solid place to get both sports and entertainment channels. Having AMC will get you an Elf live stream, and channels like BBC America, Disney, four ESPNs, FXX, Fox Sports, NBA TV, though no NFL Network or NFL RedZone. If you’re in the market for a streaming service and you like how YouTube looks, YouTube TV could do the trick for you. (Here’s the complete guide to YouTube TV channels.)

Other ways to watch AMC

You can watch on-demand content from AMC via its official website, AMC.com. Simply go to the site, click on the “TV provider sign in” button in the top right, and provide your login information from a streaming service provider. With the exception of Sling TV, every streaming service listed above should work.