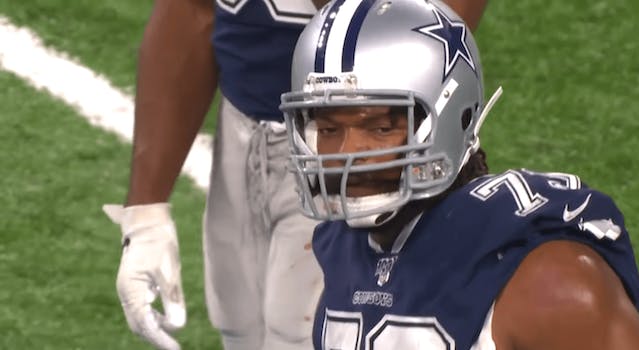 How to stream Cowboys vs. Patriots live

The top offense and the top defense in the NFL clash on Sunday.

The New England Patriots and the Dallas Cowboys are both on top of their respective divisions, but the Pats have had a much smoother road than the ‘Boys.

Though the Cowboys have had the top offense in the league for pretty much the entire season, they have had a bad habit of letting games slip through their fingers. Despite their dominant attack, they are only one game up on the Philadelphia Eagles in the NFC East.

This has been one of the weakest Patriots offenses in recent memories, but Tom Brady’s savvy veteran play has kept New England in games as their top-ranked defense clamps down on opponents. As ever, the Pats have been extremely well-coached, grinding opponents into submission, and roosting atop the perennially lame AFC East.

Though the Patriots are 9-1 and the Cowboys are 6-4, this isn’t a sure thing for New England. The only other explosive offense the Pats have faced this season were the Ravens, who soundly beat them. Don’t be surprised if the Cowboys stack points on the Pats and come away with a win here.

Here’s everything you need to know to live stream Cowboys vs. Patriots, including what to watch for on the field.

There are a number of options for watching Cowboys vs. Patriots on streaming platforms that carry FOX. However, consult a coverage map to see what game your regional channel will be playing.

Cowboys vs. Patriots live stream: How to watch NFL online

Both Sling Blue ($25 per month) or Sling Orange + Blue ($40 per month)  include NFL Network and a number of sports channels—like three ESPN channels, FS1, FS2, and NBCSN—and it’s still a nice perk that Sling subscribers can order a la carte packages. Sling TV also offers a special Latino package for bilingual viewers. Sling TV is currently offering a deal where you can subscribe for 40% off the regular price for the first month of your subscription. That means Sling Blue would cost $15, and Sling Orange + Blue would cost $25. (Here’s a complete guide to Sling TV channels and our Sling TV review.)

Dallas Cowboys vs. New England Patriots: Why it matters

While it is true that you are what your record says you are, it is difficult to imagine this Patriots offense keeping up with the Cowboys when it comes to scoring.

Dallas has an amazingly multi-dimensional offense. In a game in which Amari Cooper and Ezekiel Elliot were largely contained, Dak Prescott still threw for 444 yards last week against Detroit. There seems to be a new breakout player for the Cowboys every week. Last week, it was Michael Gallup’s turn to put up 148 yards through the air. Randall Cobb has broken 100 yards two weeks in a row. Even Tavon Austin and Blake Jarwin have had their moments.

By contrast, the Patriots are perpetually short on offensive talent this year. Even though the Patriots beat the Eagles last week, the top receiver was Julian Edelman with 53 yards. Sony Michel, the top rusher in the backfield, only totaled 33 yards on the ground.

Yes, Bill Belichick finds ways to manufacture offense, such as the Edelman passing TD last week. Plus, this defense has a habit of smothering teams. The Pats sacked Carson Wentz four times last week and held him to 214 yards, a common occurrence against this team.

Despite the Pats’ defensive excellence, it is tall order for them to hold Dallas to few enough points that Tom Brady’s ragtag offense can keep up. This Cowboys team is a bad matchup for New England, and while they won’t likely lose many more games, this could be one of those Ls.

Don’t be surprised if the Cowboys give them a good beating here. Dallas isn’t perfect, but they are perfectly positioned to outgun this Pats team.