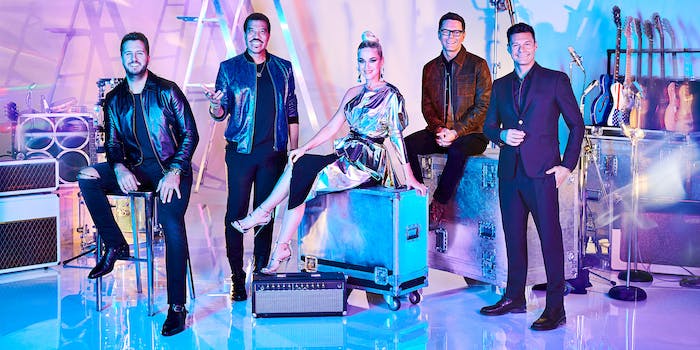 How to watch ‘American Idol’ season 18

America's favorite singing competition is back.

America may be in an election year, and sure, that’s important, but it may just come in second to the other act of mass democracy with the return of American Idol.

Open call auditions were held across the nation from Savannah, Georgia to Portland Oregon, and even online via Facebook, Twitter, and Instagram, making it the most democratic singing competition yet. But remember: only one will have what it takes to charm the country and win it all to become the next American Idol.

Here’s everything you need to know to watch American Idol online.

Who is the American Idol host?

It wouldn’t be American Idol if it wasn’t hosted by Ryan Seacrest.

Lionel Richie, Katy Perry, and Luke Bryan will serve as judges, and Bobby Bones will return as a mentor.

When does American Idol season 18 air?

What channel is American Idol on?

American Idol originally aired on Fox, but now it airs on ABC.

How to watch the American Idol online

Hulu with Live TV not only gives you access to on-demand content, but you’ll also be able to stream live TV, including local networks like ABC. If you miss the Oscars when they air, no worries: It will be available on demand along with countless movies, classic programs, and of course, original series available exclusively on Hulu. You’ll also get access to almost 60 channels, including Lifetime, ESPN, USA, and plenty more. (Here’s the complete list of Hulu Live TV channels.)