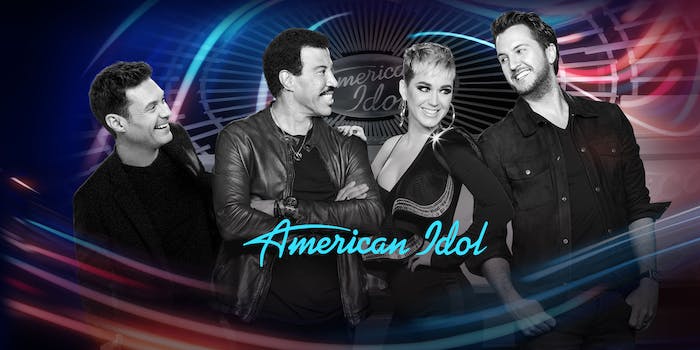 How to stream ‘American Idol’ for free

America's favorite singing competition is back.

Sorry, Star Search—your talent show doesn’t hold a candle to American Idol. Since 2002, young amateurs from across America put their pipes on the line in a no-holds-barred singing competition. The series has introduced the world to major pop stars, including Kelly Clarkson, Jennifer Hudson, and Carrie Underwood.

After running strong for 15 seasons on Fox, American Idol waved goodbye in 2016. But the people’s thirst for musical battle royales could drown the lower 48, so the series returned in March 2018 on ABC. Music legends Katy Perry and Lionel Richie serve as judges, along with country music star Luke Bryan. And it wouldn’t be Idol without Ryan Seacrest helming hosting duties.

Here’s everything you need to know to watch American Idol online for free.

What channel is American Idol season 2 on?

American Idol will be broadcast on ABC.

How to watch American Idol season 2 online for free

All of the major live TV streaming services offer a one-week trial, so you can watch the latest episodes of American Idol for free. But they all vary in terms of which local channels they offer and their coverage areas. In some cases, a live version of ABC won’t be available; instead, the service will offer an on-demand version, allowing you to watch the next day. Be sure to use the links below to see exactly which channels you’ll receive with each service.

If you want your gaming and streaming needs met in the same place, PlayStation Vue was made for you. Jumping from your favorite game to your favorite show is seamless, and controlling it is as intuitive as playing a game. You don’t need a PS4 console to enjoy this service, though. You can also use a Roku, Amazon Fire devices, and Kodi. Plus. Get access to awesome channels like AMC, BBC America, and Bravo in PlayStation Vue’s entry-level package. One subscription works with up to five devices, all with unlimited cloud DVR storage making it one of the most binge-friendly solutions. (Here are all of PlayStation Vue channels.)

Cable giant DirecTV offers its own online streaming solution with DirecTV Now. For those who need a pile of channels, DirecTV Now offers upwards of 125 channels in its most expensive package, in case you want to relive the days of endless surfing. However, its basic Live a Little Plan will cover most of your live-streaming needs, including getting you access to ABC where you can stream the American Idol. (You can find the full list of DirecTV Now channels here.)

Where to watch American Idol episodes

If you missed out on the return last year, you can relive the magic along with episodes from season 2 on the ABC website. You will need a login from a cable provider or any of the live TV streaming services above to watch.