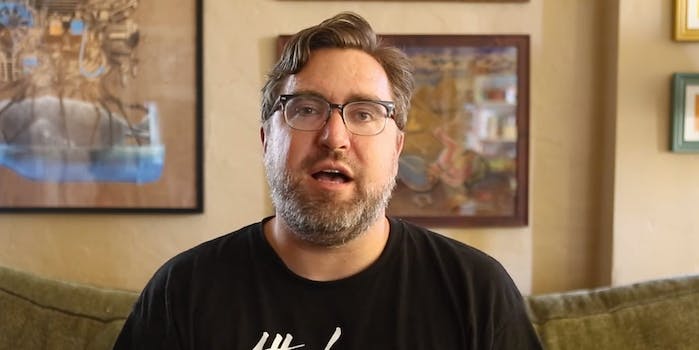 'It would just be nice to see some changes in place that help us make a little better living so we can do what we do best.'

For a music video director, a VMA nomination can be a pretty big deal in terms of exposure and opening doors. After Josh Forbes was nominated, his excitement turned to dismay when he realized he’d literally have to pay to open that door.

Forbes, a filmmaker who directed the video for Walk the Moon’s megahit “Shut Up and Dance,” which was nominated for Best Rock Video, found out about the honor earlier this month. But after inquiring about tickets and hitting dead ends, he discovered he’d actually have to pay if he wanted to attend the show. That would cost him anywhere between $450 and $800 a ticket. (Another nominated director also discovered he wasn’t invited after getting radio silence from MTV.)

“When I found out, I called MTV and they said, ‘Who do you want to speak to?’” Forbes told the Daily Dot via email. “And I explained my case and said, ‘Um, whoever someone is supposed to call when they are nominated, I guess?’ Then I talked to my rep, who has been down this road hundreds of times, and she basically said, ‘Don’t worry about it. It sucks but that’s just how it goes.’”

Baffled, Forbes, who has also directed videos for Sara Bareilles and Good Charlotte, decided to crowdfund a ticket via GoFundMe. He created the project Aug. 15, propping it up with this logic:

I’m looking at this as a sort of social experiment. If I could get a bunch of people to donate a few bucks a piece I just might have a shot at going to this silly thing.

And if I go, I’m not just going for myself, I’m going as a champion for the little guy. The outsider goofball who wasn’t invited to his own party.  I represent every little guy with a dream, hoping for a shot at the big leagues. Is that too grandiose? Perhaps, but it’s worth a shot.

As of Aug. 20, Forbes has collected more than $2,300, which afforded him and his “very pregnant wife” a chance to go to this “silly thing.” Friends and strangers alike chipped in and offered support, and in the GoFundMe pitch, Forbes said any money beyond the $1,300 would go to a suit and an Uber. What are his plans now? Well, he still needs a suit.

“All I wear is jeans, plaid, and horror movie T-shirts,” he said.
“I’m kinda a mess that way. We need to get my wife a dress too. I’ve had offers from places to style [us] for free, so we’ll see how that pans out.

“If there’s money left over, which is looks like there will be, I’d like to make some sort of donation to my kid’s school,” he added. “My son is visually impaired and goes to an amazing nonprofit school called the Blind Children’s Center.” (He says that if people still want to donate to the cause, they can give money to the school here.)

Forbes admits that even though people are consuming music videos on YouTube way more than MTV (Walk the Moon’s video has more than 85 million views), the VMAs still hold some weight. So what does it mean that creators are being priced out?

“I don’t really know the history of the award show so I can’t really comment on it, but my guess is that it’s a vestige of the old era,” he said. “It’s like how we still have a tailbone. When we were all tadpoles, it made a lot of sense. In the same way, this industry used to be so bloated and overflowing with money that an $800 ticket to a major label or even a major production company might feel like a drop in the bucket. Back in the day, videos cost a couple hundred grand and up. Right now, if there’s a budget that’s $75,000, you’re lucky to even get the chance to write an idea for it.”

And it’s not just directors who are on the hook. “Every director has to submit a treatment for a music video just for the chance to be considered,” Forbes explained. “So what happens is, they’ll reach out to 20-30 people and get them all generating ideas for free. It’s a ton of work. Sometimes it takes me a whole week to write one treatment because I’m designing the document, as well as writing the idea. … That whole system needs to change. I’m fine with pitching, but it’d be nice to know I have a 33% chance of getting it. Even a 20% chance would be nice. Right now it feels like we’re all busting our ass for a 3% chance at a $30,000 video. Which, in the end, will pay us (typically, but usually lower) 10%. So we’ll work for a week for a 3% chance at earning $3,000. All the while, we’re toiling for a mega corporation, for people with expense accounts and bands that are pulling in big-time money. It’s frustrating.

“So on the one hand, I’m really glad that music videos exist. I’m glad that I was able to work my way up in them. I still love music videos and love collaborating with artists. It would just be nice to see some changes in place that help us make a little better living so we can do what we do best.”

We’ve reached out the MTV for comment and will update if and when a representative responds.