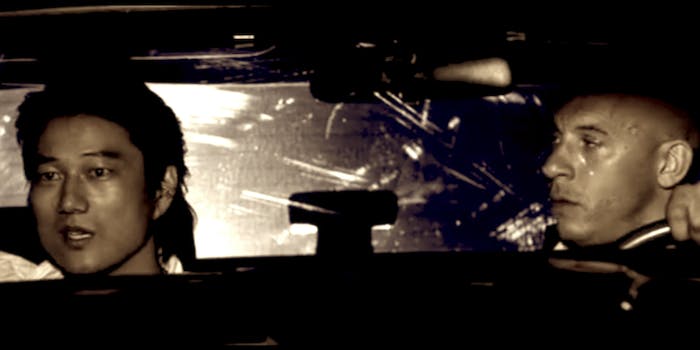 The 'Fast & Furious' continuity can get a bit confusing, but (once again) here's Vin Diesel to save the day.

Vin Diesel loves his franchise characters—he’s known for making video games and new installments for them to keep them alive at impossible odds.

Evidently, though, it took some time (and probably some money) for Dom and the Fast & Furious franchise to become favorites—he left the franchise after the first film, and ended up returning for the fourth only after the studio, debating whether to send future installments direct-to-video, begged him to make a cameo in Tokyo Drift.

The audience response to his cameo was so massive that the studio not only canned the direct-to-video idea, but also decided to give Diesel a much greater amount of creative input on the future films. He wasted no time: For his big return in the fourth film, Fast & Furious, he took it upon himself to write and direct a preclude to the film that gave a glimpse at what he’d been up to during the past few outings. The wonky continuity is part of the Fast franchise’s charm, which is why it’s surprising that a short Diesel made in 2009 actually contains some small spoilers for the newest film, Furious 7, released six years later.

If you haven’t seen Furious 7 yet, do so, and then check out Los Bandoleros.

Aside from the sheer coolness that Diesel wrote and directed a prelude to his return to the franchise, a few short lines also fuel speculation that director Justin Lin, who directed three of the Fast films, intended Han to be the same character (also named Han) that Sung Kang played in his breakout film Better Luck Tomorrow. If so, this short would be his first meeting with Dom, and where his luck did indeed get better tomorrow (until he later died in Tokyo).