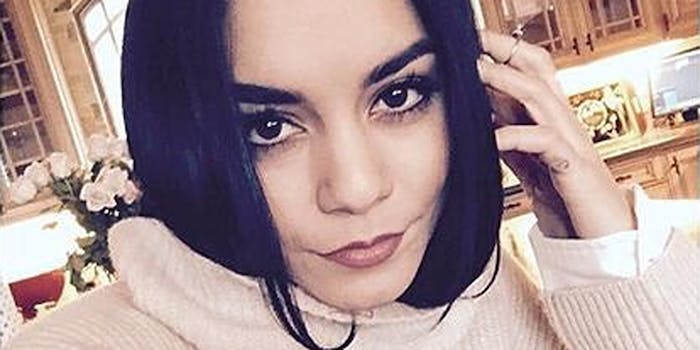 Her dad won't get to see her burning up the quarter mile as Rizzo in tonight's long-awaited live musical.

Fox’s long-awaited live performance of Grease airs tonight, but millions of Americans might be tuning in for an unexpected reason: to see how cast member Vanessa Hudgens pulls through just hours after the death of her father.

Hudgens announced Sunday afternoon that her father, Greg Hudgens, who had spent the last several months battling cancer, had passed away. Tonight, Hudgens takes the stage as Rizzo in the much-anticipated production.

I am so sad to say that last night my daddy, Greg passed away from stage 4 cancer. Thank you to everyone who kept him in your prayers.

Tonight, I do the show in his honor.

Hudgens had announced in August that her father had been recently diagnosed with the final stage of the disease. She made the announcement while accepting an award from the Industry Dance Awards for her “triple-threat talent.” Dedicating the award to both her father and boyfriend Austin Butler’s late mother, Hudgens stated:

This award, it means a lot to me but I dedicate it to my boyfriend’s mom, Lori, my dad, and to all the families out there who are struggling with this, because it really takes a strong person and a strong family to be able to help those out who are going through this.

Tonight, Hudgens’ sizable fanbase will see her own strength in action. An hour after tweeting the announcement of her father’s death, Hudgens enthusiastically promoted the show:

Love2 @VanessaHudgens. I know what losing a parent 2 cancer is.The fact ur performing 2night is a testament 2 ur strength. Shine on lovely 1

omg I'm lit gonna cry I love her so much you've been working SO HARD ILY RHE SHOW MUST GO ON @VanessaHudgens https://t.co/DHjcOdum1b

The Fox production of Grease is a newly adapted hybrid of the original stage musical and the famed film adaptation. It stars Hudgens in the iconic role of Rizzo, the leader of the Pink Ladies girl gang. Musical theater star Aaron Tveit and Julianne Hough co-star as Danny and Sandy, with a turn from Carly Rae Jepsen as Frankie.

The rest of the Grease cast was reportedly pretty emotional heading into tonight’s performance:

Full cast & crew morning meeting at @GoGrease. Not a dry eye in the room….I'm not talking rain. #livinginthemoment #GreaseLive

Still, overall the outlook was positive:

The Broadway community and fans of musical theater have spent the week gearing up for tonight’s performance. Tributes have come from Hamilton cast members and BFFs Lin-Manuel Miranda and Jonathan Groff:

And fellow Fox actors have also gotten in on the celebration, like Gotham‘s Catwoman, Camren Bicondova: