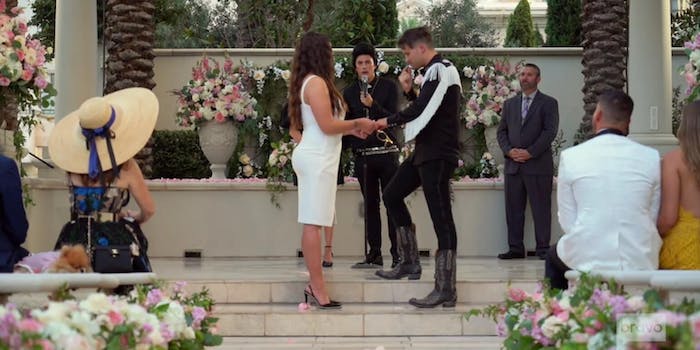 The original crew heads to Vegas to solidify a marriage.

This week, the original crew members (plus Max, who they’ve adopted like a new puppy to tote around) head to Vegas to solidify Schwartz and Katie’s marriage… which happened years ago, but apparently the two never filed the paperwork, which checks out for them.

If I’m being honest, I thought this would be a pretty fun episode: The original gang (minus Scheana and Kristen, who I supposed are replaced by Brittany and Lala) all back together, on a trip to Vegas no less! It’ll be like old times! [Narrator voice: It was not like old times.]

Instead of taking you through what was a mildly entertaining time at best, I’m going to give you the Cliff Notes version of what the ol’ VPR kids got up to in Vegas, with the warning that what was supposedly the A plot this week did not live up to expectations and was more or less accurately summarized in last week’s trailer. Here we go:

[Takes deep breath to deliver monologue:] Katie, Schwartz, Jax, Brittany, Stassi, Beau, Sandoval, Ariana, and the Vanderpumps go to Las Vegas for the wedding and also to very obviously promote the new partnership between the Vanderpumps and Caesar’s, where there is now a branded cocktail lounge and suite; it is so casually mentioned, oh, say, 100 times, but who’s counting? Ariana makes this face when Stassi suggests she and Sandoval get married.

At dinner the night before the wedding, there is a waitress who looks and acts like Scheana, it’s a little eerie, and I have to imagine she was hired for this exact reason, perhaps even for this exact episode.

It’s a little too much of a manufactured moment to be a believable coincidence. Max later hooks up with her and when FaceTimed by Lisa Vanderpump, “accidentally” reveals that she is in his bed.

It’s some of the worst acting I’ve ever seen and for some reason introduces a new plotline that Lisa is upset with Max for sleeping with “her” staff (not hers, Caesar’s, but sure) and he is in big trouble, mister! Nonsense, but OK. Oh, and upon first arriving in Vegas, Lisa plays a prank on Schwartz by putting her bra into his luggage to get him in hot water with Katie; when it’s discovered, the couples’ respective reactions (Schwartz, giggling, haha, who knows whose bra it is? Katie, confused, not angry, sort of resigned) are troubling. Later everyone is let in on the ha ha ha joke and they all laugh; how funny that it’s plausible your husband could find a stray bra in his suitcase! The wedding happens, a motley crew in attendance. An after-party dinner is held, Beau tells Lisa he will propose to Stassi soon, alleged partying happens, though we do not see it. In the morning, it’s revealed Schwartz lost the marriage certificate.

I expected some good content out of Vegas but nay, it’s the newbies back home polishing glasses at SUR and getting drinks at L.A. drinking holes who satisfied me.

This isn’t to say that their B plot was action-packed by any means, but at least it moved things forward and was also dotted with significant updates. For starters, Scheana finally completed her egg retrieval. Let that sink in for a moment: That’s huge! It’s something as an aside in the episode, but a genuine congrats to our petty queen.

Chatter over Dayna’s new romantic connection with Brett continues between the girls, namely Charli and Danica, who are (correctly) non-plussed by Brett. Yes, he looks like a Disney prince, but also yes, he is ridiculous and putting on for the cameras. (Sidenote: His “crush” on Lisa is being so forced into this season I’m starting to wonder if LVP herself wrote it in as a little self-esteem boost or something. Or perhaps the editors are splicing in those scenes to fill time?)

Also, where we are lacking in drama, we are getting in one-liners from these ladies.

I think I’ve been approaching this seasons of Vanderpump Rules entirely wrong: I’ve been too dependent on the original cast and dismissive of the newbies. But perhaps now, more than halfway through the season, it’s time to let our new SURvers take the lead; they’re younger, a little more likely to make fast friends and faster enemies. Most importantly, they certainly aren’t resting on their reality TV laurels.