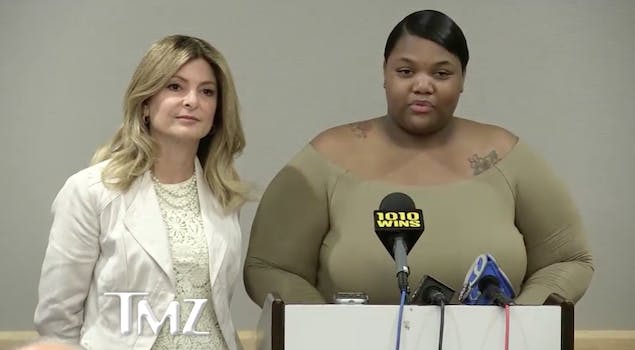 Usher’s accuser body-shamed by the internet amid STD allegations

On Monday Quantasia Sharpton appeared in a press conference with her lawyer Lisa Bloom to publicly accuse R&B singer Usher of not disclosing that he had genital herpes. Instead of discussing the details of the case, the internet focused on body-shaming Sharpton for being fat—and largely failed to take her allegations seriously.

Sharpton says she was picked out of a crowd during one of Usher’s shows where she was celebrating her 19th birthday, and later had sex with the artist in her hotel room. She tested negative for herpes, but says the lack of disclosure violated her rights. “Although I am negative I was upset by the reports, because I would never have consented if I would have known,” Sharpton said.

According to Sharpton, another accuser who has not publicly come forward has tested positive for genital herpes.

This situation highlights how being fat also fosters an egregious amount of dismissal and disbelief. Many simply can’t believe that Usher would have engaged in sex with Sharpton because of her size.

We will believe her if she said usher gave her diabetes pic.twitter.com/QHwv2qETOr

Some online came to Sharpton’s defense, pointing out the ridiculousness of dismissing the accusation based on her weight.

Y'all so invested in "Thick Beyoncé" and "Thick Rihanna" but then fat shame and deny the humanity of an actual fat Black woman. #Usher

Discrimination against fat women can affect their access to healthcare, job stability, and legal protections. Even though the internet is obsessed with Rihanna’s recent weight gain, and the idea of being “thic,” this body-shaming reminds women that their value is dependent on how others perceive them.