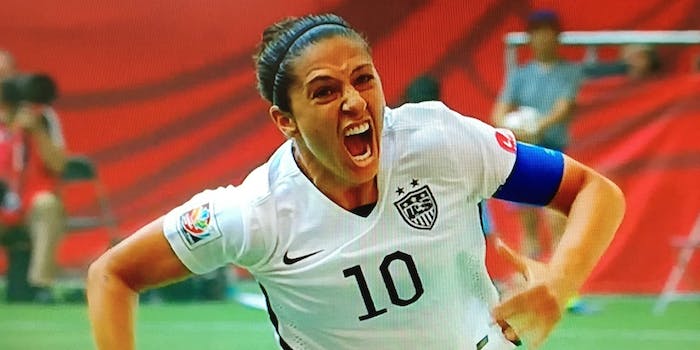 Against China in the quarterfinals and against Germany in the semifinals, Carli Lloyd had to wait until late in the game before scoring her heroic goals and shooting her American teammates into the next round of the Women’s World Cup.

But in the finals on Sunday, with the United States hoping to avenge its World Cup title loss to Japan from four years earlier, Lloyd went ballistic in the first 16 minutes, scoring a hat trick and helping give the Americans a four-goal lead early in the first half en route to a 5-2 win.

It’s the first time in women’s soccer history that a country has won three World Cup titles, and for the Americans, this year’s crown will be added to the titles from 1991 and 1999.

Lloyd, who’s been the hero so many times for the U.S. in this World Cup, scored twice in the first five minutes of the game, and Japan had no answers as the game slipped away just as fans were getting settled into their seats. It’s the fastest hat trick ever in a Women’s World Cup game.

And with the Japanese defense and goalkeeper Ayumi Kaihori on their heels—and probably in a state of shock—and after Lauren Holiday knocked in her own score, Lloyd did this.

According to Fox, that final blast from Lloyd covered 54 yards.

And just because we’re not a website that only features heroics from Lloyd, here was Holiday’s blast to the back of the net.

In the 27th minute, the Japanese got on the scoreboard with a goal from Yuki Ogimi, and they struck again early in the second half off a set piece when the ball struck American defender Julie Johnston in the head and bounced past goalie Hope Solo to cut the American lead to 4-2.

The U.S. and Tobin Heath, though, responded thusly.

While the Americans had been disappointing for much of this tournament—they continuously won but were somewhat underwhelming —Lloyd was always in the right place to pick up her teammates and send them forward in the tournament. In part, that was because of Megan Rapinoe’s yellow-card accumulation suspension for the China game that forced American coach Jill Ellis to put Lloyd in a position to be more aggressive on offense.

Against China, Lloyd’s header into the net in the 51st minute provided the only goal of the game, and vs. Germany, Lloyd’s successful penalty kick was the first score in the U.S’s 2-0 victory.

After the unreal first 16 minutes of action, the Internet paid homage to Lloyd and her teammates.

If Carli Lloyd isn't FIFA President by the time this game ends something is terribly wrong.

In the 79th minute, with the game well in hand, Abby Wambach—one of the all-time American greats who had been relegated to the bench for the past few games—was inserted into the contest to take her own personal victory lap.

And who was the player who gave up her on-field captain’s armband to place it on Wambach as soon as she stepped onto the pitch? You could probably guess.