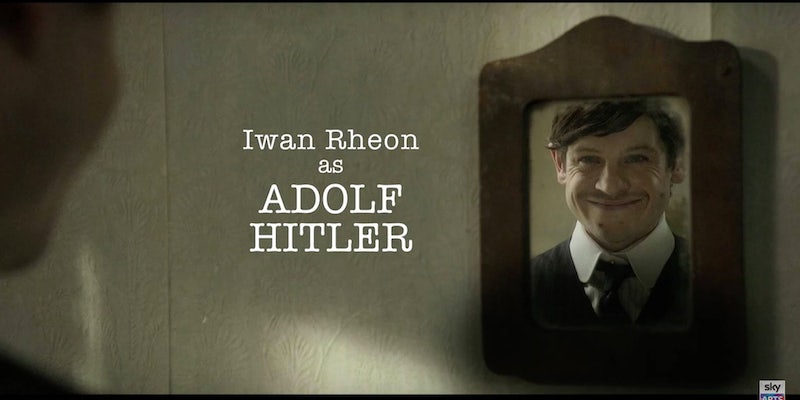 Iwan Rheon is just one of many stars cast in this satirical short series.

The eight-episode comedy Urban Myths debuted its trailer on Wednesday, storming fans with an impressive, celebrity-packed cast. Among the iconic stars is Game of Thrones‘ Iwan Rheon, who played one of television’s most loathed, sadistic villains, Ramsay Bolton. Though—spoiler alert—Bolton was killed off in season 6, Rheon is back on-screen as another historic villain: Adolf Hitler.

The award-winning Welsh actor will play a young Hitler, years before his dictator days, in one of Myth‘s episodes.

The TV series is said to be based on an unconfirmed trip that Marlon Brando, Elizabeth Taylor, and Michael Jackson allegedly took after 9/11. The trailer cites the tales as “true… ish.”

I guess he was worried that Ramsay Bolton would be the most despised character he ever played, so now he is playing Adolf Hitler. lol pic.twitter.com/7BVZ5MmlsR

Alongside Rheon are some of today’s most notable actors representing Hollywood’s most iconic: Rupert Grint is “Adolf’s friend,” Brian Cox is Brando, Aidan Gillen is Timothy Leary, Stockard Channing is Taylor, Eddie Marsan is Bob Dylan, and Joseph Fiennes is Jackson. (The casting of Fiennes conjured up criticism and backlash for casting a white actor to play the iconic African-American singer.)

In the stories, Hitler gets rejected from art school, Cary Grant trips on acid with Leary, and Samuel Beckett drives Andre the Giant to school.

Update 7:18am CT, Jan. 13: Sky has pulled the Jackson episode of Urban Myths after complaints from the Jackson family.