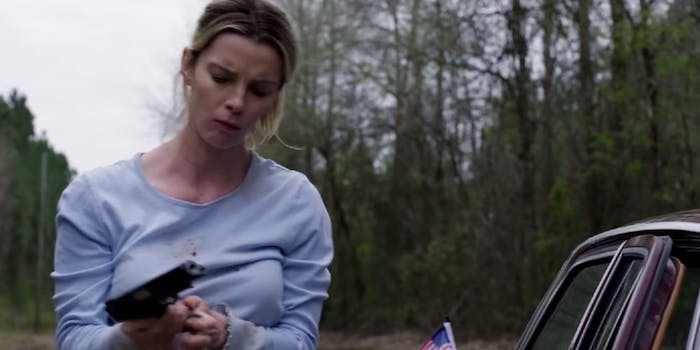 After the El Paso and Dayton mass shootings, Universal Pictures has pulled the plug on The Hunt, a controversial movie about wealthy elites hunting rural conservatives. The film company says it is simply not “the right time” in wake of recent mass shootings, according to Polygon.

The decision also comes after President Donald Trump indirectly criticized the movie in a tweet on Friday. He called Hollywood the real “racist” over the movie.

“The movie coming out is made in order to inflame and cause chaos,” Trump tweeted. “They create their own violence, and then try to blame others.”

….to inflame and cause chaos. They create their own violence, and then try to blame others. They are the true Racists, and are very bad for our Country!

The company had already put a pause on marketing for the film after a combined 31 people died in the two mass shootings–which happened merely 13 hours apart from one another. The trailer featured stars Betty Gilpin and Ike Barinholtz with guns.

In the film, the liberal elites hunt the “deplorables,” a possible reference to Hillary Clinton calling Trump’s base this during the 2016 campaign. In turn, the “deplorables” begin attacking the elites. The movie was intended to be a satire and commentary on mass shootings and political divisions in the nation.

But neither side of the aisle was too pleased with the movie. While Trump voters don’t like the depiction of violence against conservatives, some liberals have also decried the movie because it makes viewers sympathize with the Trump-style characters, according to Vox.

The very development & filming of “The Hunt” shows just how sick the liberal left in Hollywood are. That they would spend money to make such a violent, politically-charged film like this, considering the state our country is in, is inconceivable. 2/3

Some think that Universal shelving the project isn’t a good move. They say that pulling a movie because of Trump’s criticism could set a “precedent for censorship.” Others doubt that not showing the movie, which depicts gun violence, will have an impact on the number of mass shootings.

Feel so sorry for @craigzobel and the cast and crew of #TheHuntMovie … @UniversalPics , please reconsider pulling a film based on political pressure. It sets a dangerous precedent for censorship…

Well we canceled THE HUNT and Walmart got rid of their video game signage so I guess that’s that for mass shootings in America pic.twitter.com/3Hsv11T5N8

While I commend Universal and Blumhouse for their humanity .
This is not the solution.

Universal wasn’t the only company to pull a project after the mass shootings. ESPN announced Friday that it would postpone an Apex Legends stream because of the game’s depiction of gun violence, according to TMZ.

The Hunt was slated to be released on Sept. 27.