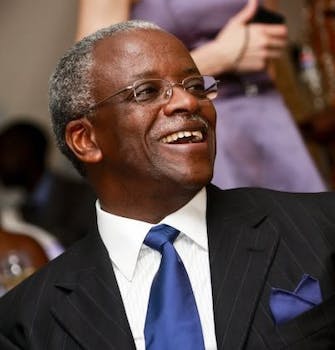 Kony is on everyone's minds, thanks to an unforgettable viral video. But he isn't in Uganda, the country's leader reminds us.

The success of “Kony 2012“—a video calling attention to the alleged misdeeds of Ugandan warlord Joseph Kony—was propelled in large part by celebrities and citizens who shared it on Twitter and Facebook.

Now a major figure tied to the issue is spreading word in those same communities to try to disassociate his country with Kony: Ugandan Prime Minister Amama Mbabazi.

“@Oprah As PM of Uganda,I appreciate your interest & invite you to visit. We have peace,stability &amp; great people. #KonyisntinUganda —Amama Mbabazi”

Twitter Inc. has not verified the @AmamaMbabazi account—not that that means much, given the site’s frequent mistakes in verifying celebrities—but according to Alan Kasujja, the host of a morning radio show in Uganda, the handle is legit.

It’s also linked from Mbabazi’s Facebook account and is also being followed by @NRMSec, a Twitter account for Mbabazi’s political party, the National Resistance Movement, which itself is linked by that organization’s official site.

While Mbabazi evidently isn’t thrilled by the fact that much of the world now associates Uganda with a brutal warlord, the message of Kony 2012 isn’t exactly at odds with the Ugandan government.

The video does not directly blame any high-ranking Ugandan officials for the fact that Joseph Kony is still at large. Invisible Children, the group behind the video, has even received criticism for implicitly aligning itself with the Ugandan army, which has been accused of its own fair share of human rights violations.

Furthermore, to Mbabazi’s point, the video acknowledges the fact that Kony’s Lord’s Resistance Army has moved on to other countries, perhaps having left Uganda altogether.