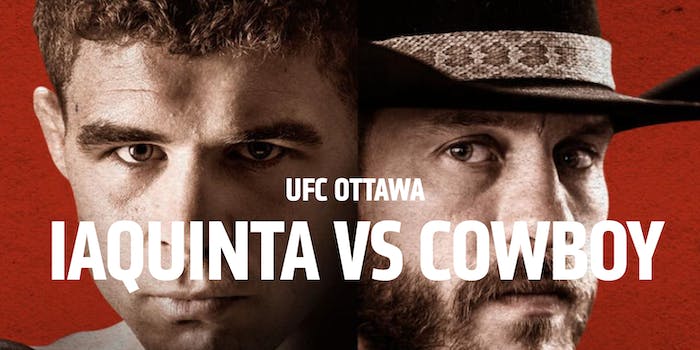 How to stream UFC Fight Night 151 for free

UFC Fight Night 151 will have huge implications for the lightweight class. The May 4 card, which takes place at Ottawa, Ontario’s Canadian Tire Center, features a top-10 match-up, as it pits no. 4-ranked “Raging” Al Iaquinta (14-4-1) against no. 9-ranked Donald “Cowboy” Cerrone” (35-11-1) in the main event. Billed as “Iaquinta vs. Cowboy,” UFC Fight Night 151 will also have implications within the middleweight division as well, as no. 8-ranked Derek Brunson (18-7) takes on no. 13-ranked Ontario native Elias Theodorou (16-2).

But whether fans are pining to see what happens in the main event or how the middleweight bout ends up, there’s an easy way to access all of the night’s action. Here’s everything you need to know to live stream UFC Fight Night 151 for free.

For UFC fans, there’s only one streaming service that will provide the mixed-martial arts coverage they crave: ESPN+. Despite the limited options, UFC aficionados who subscribe to ESPN+ gain an unparalleled resource to follow the sport and binge on other premium athletic and ESPN content.

What prompted the current arrangement? In May 2018, ESPN inked a $1.5 billion deal with UFC to carry 30 Fight Nights, with the company selecting 20 of those events to run on ESPN+, including Fight Night 151. Both ESPN and UFC then extended their partnership in January 2019 to make ESPN the home of all UFC pay-per-view events, which allows active ESPN+ users to purchase any PPV UFC event for $59.99 per event. However, UFC fans who don’t have an ESPN+ account but wish to subscribe can gain a year’s worth of the streaming service with one $79.99 PPV purchase. That’s a pretty sweet deal.

Al Iaquinta vs. Donald Cerrone: Why it matters

Donald “Cowboy” Cerrone is an MMA legend. In his eight-year UFC career, he’s posted a 21-8 record (he went 13-3-1 in five years in the WEC) and turned in seven Performance of the Night results. However, he faces a similar future as Alastair Overeem, as his time to claim a championship belt is running out. Cerrone is 36 years old and can suffer no setbacks as he attempts to get back to the lightweight title, a plateau he’s reached once—before losing to Rafael dos Anjos in December 2015.

Meanwhile, Cerrone’s opponent, Al Iaquinta, is relishing his chance to take a crack at the veteran fighter. In Iaquinta’s most recent fight in December 2018, he clocked a Performance of the Night result, defeating Kevin Lee in a unanimous decision. As he told BJPenn.com in an early April 2019 interview, Iaquinta strongly believes that he’ll be able to slow Cerrone’s return to the lightweight division.

A win for either fighter would certainly solidify their standing, but it seems that Cerrone has the most to lose from a negative result.