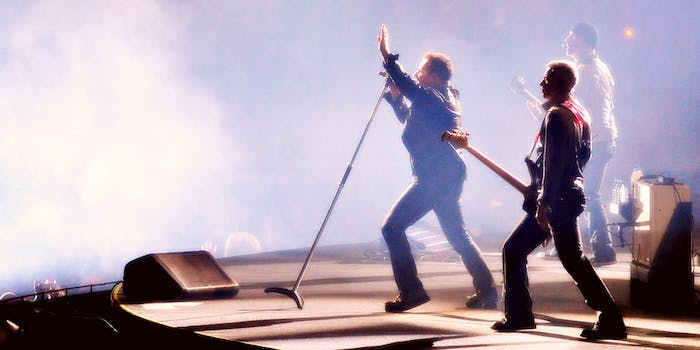 The biggest album of the year won't be on the charts until mid-October.

U2 might have the largest album release in history, but the massive release to around 500 million iTunes subscribers during Apple’s iPhone 6 and Apple Watch event Tuesday won’t count on the Billboard charts.

In an unprecedented move that thrilled and annoyed music fans—and even creeping out some of them—U2 joined Apple CEO Tim Cook onstage during the livestreamed event, and after performing the first single of their new album, Songs of Innocence, announced that every iTunes subscriber already had the album purchased and downloaded for them, courtesy of Apple.

“To celebrate the 10-year anniversary of our iPod commercial, they bought it as a gift to give to all their music customers,” Bono explained. “Free, but paid for. Because if no-one’s paying anything for it, we’re not sure ‘free’ music is really that free.”

Despite all of Cook’s declaration that U2 had the “largest album release of all time,” which has since received mixed reviews from critics, that title may be in name only thanks to a technicality from Billboard.

Billboard won’t recognize Songs of Innocence, despite Apple purchasing every single copy and it streaming on Beats Music, because all of those copies were given away for free. And you won’t see it on the charts at all until the physical copy of the album comes out on Oct. 14. Billboard released the following statement:

While U2 surprised the music world by releasing its new album, Songs of Innocence, today as a free download to iTunes Store account holders and for streaming on Beats Music, you won’t see it on the Billboard 200 albums chart for another month and a half…

Free or giveaway albums are not eligible for inclusion on Billboard’s album charts and do not count toward sales tracked by Nielsen SoundScan (which supplies data for Billboard’s sales-driven charts). The same sort of scenario played out in 2013 with Jay Z’s Magna Carta… Holy Grail album, which was given away to Samsung users, and, on occasion, when Google Play offers free downloads of select albums.

Once Songs of Innocence goes on sale beginning Oct. 14, it will then set its sights on Billboard’s sales charts. On that date, the album will be available in both standard and deluxe editions to physical and digital retailers, as well as on streaming services other than Beats. Until then, only current or new iTunes or Beats account holders will have access to the album.”

The album may have been delivered to 500 million iTunes accounts, but the actual number of downloads might not be anywhere near that number. According to Billboard, Songs of Innocence was only downloaded around 200,000 times in the days since the album’s mass release, while Re/code is reporting 2 million downloads—some that may be due to settings that automatically download purchased material. Some people might not know how to access it, but others might be trying to avoid the album at all costs—which, thanks to Apple, is currently valued at $0 for iTunes customers.