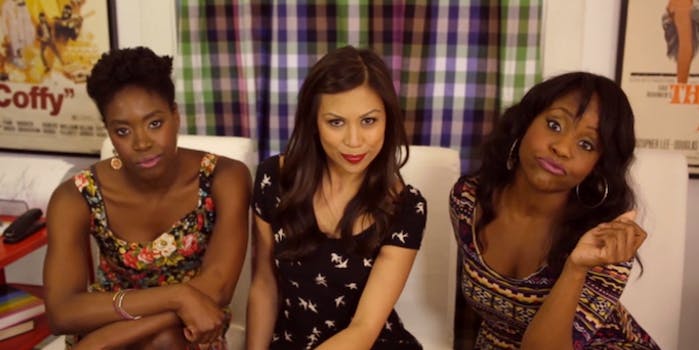 What happens to women of color when they show up at an audition?

The representation of women of color in film has been the subject of many a thinkpiece lately, and rightly so. There needs to be more dialogue about how to subvert the female “sidekick” stereotype. However, Tess Paras recently summed up the whole issue in a two-minute video.

“Typecast” is essentially a parody of Lorde’s “Royals,” but the lyrics relate to those sidekick stereotypes. Paras and two other actresses, Ayana Hampton and Haneefah Wood, are auditioning for three separate roles, then they break down the possible outcomes via the unspoken rules of Hollywood films: Paras will play the white girl’s nerdy friend, but the white girl can’t have two black friends.

The alternatives? How about “oversexed Asian” or “urban girls of flavor.” Paras relates that what would be better than being typecast would be getting her own show, with her own “white friend, brown friend, beige friend, yellow friend.” We would watch that show. Hollywood, are you listening?