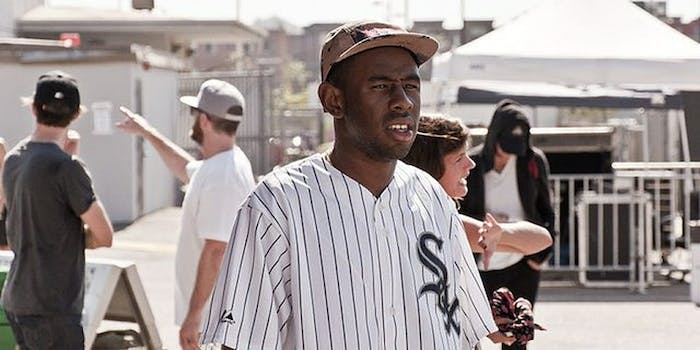 U.K. bans Tyler the Creator because of lyrics he wrote 6 years ago

Can we really ban artists from entire countries because we disagree with art they made as a teenager?

Rapper Tyler the Creator has been officially barred from entering the U.K. for a period of three to five years, he said on Wednesday.

The rapper’s manager, Christian Clancy, explained in a Tumblr post that the team received a letter from the U.K.’s Secretary of State for the Home Department, Theresa May.

the letter specifically cites lyrics he wrote 6-7 years ago for his albums bastard and goblin – the type of lyrics he hasn’t written since… highlights from the letter include that his work “encourages violence and intolerance of homosexuality” and “fosters hatred with views thats seek to provoke others to terrorist acts.”
to say that i am confused would be an understatement. can you imagine being beholden to things you said when you were 18? tyler has been to the UK over 20x in the last 5 years without incident (shows, in stores, meet and greets). we rented out a movie theatre last month in London for a private showing of napoleon dynamite for his fans. literally last month.
more importantly, this is a broader issue of free speech, with new lines being drawn that include reaching back in time without acknowledging growth. in fact, punishing growth. what i do know is tyler is part of an argument that is counter to who he has become. how do you punish someone for growing up?

Tyler the Creator, a member of the Odd Future collective that also includes Frank Ocean (who shared his experiences with same-sex attraction in 2012), rapper Earl Sweatshirt, and about a dozen others. The entire collective was banned from New Zealand in February 2014, where they were scheduled to open for Eminem. New Zealand authorities cited a “potential threat to public order and the public interest for several reasons, including incidents at past performances in which they have incited violence.”

On Twitter, Tyler the Creator announced the ban with confusion, saying that the U.K. letter referenced lyrics he wrote six years ago with no acknowledgment of his current milieu. He also pointed out the many recent trips he’s made to the country to perform.

BASED ON LYRICS FROM 2009 I AM NOT ALLOWED IN THE UK FOR 3-5 YEARS ( although i was there 8 weeks ago) THAT IS WHY THE SHOWS WERE CANCELLED.

Fans and industry supporters also jumped in and heavily criticized the U.K. decision to bar Tyler the Creator online. Some, like rapper Azealia Banks, called the ban hypocritical in light of other artists that have also been accused of homophobic and misogynist lyrics—specifically, Eminem.

We ban Tyler the Creator from the UK for using homophobic language in old songs?What about the tens of thousands of homophobes already here?

One Tyler fan named Luke Parfitt tried to petition Parliament on Wednesday. The petition is, at press time, blocked from viewing on the Parliament website, with a message stating that “We need to check it meets the petition standards before we publish it” and to try back in a few days.

The majority of the controversy around Tyler the Creator’s offensive lyrics stems from a 2009 mixtape called Bastard that was written when he was a teenager. On a particularly song called “Blow,” he raps from the perspective of a guy who rapes and murders a woman. But according to Rap Genius, which examines the meaning behind rap lyrics, the song is about a serial killer—not Tyler’s actual desires or actions.

“The song “Blow”… [is] from the mind of Ted Bundy, the way he got females with his charm, the smooth way that he got it… I wrote that song from that mindstate.“
“ i made that after listening to Lets Get Blown, ( i am a big neptunes STAN if you didnt know) thar why the beat was called blow and i never changed the title and just made a song named after the beat haha, i was 16. i miss those days cause i had no one watching and i was just running free, now its eyes on everything so its hard to be natural when. never mind.”

Fader magazine reached out to the U.K. Secretary of State’s office on Wednesday night for clarification on why Tyler the Creator was barred from the country.

“Coming to the UK is a privilege, and we expect those who come here to respect our shared values,” the office wrote in an email to Fader.

“The Home Secretary has the power to exclude an individual if she considers that his or her presence in the UK is not conducive to the public good or if their exclusion is justified on public policy grounds.”