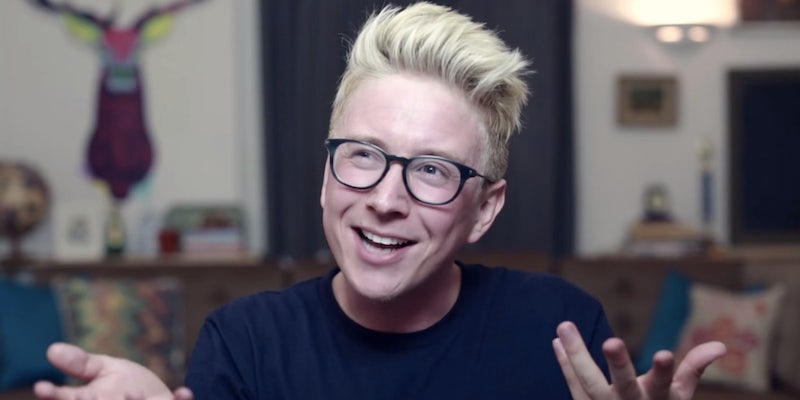 The tour kicks off May 13 in Dublin, Ireland.

It’s official. Tyler Oakley will hit the road again to see his legion of fans, and this time he’s taking his pajama party international.

“Last year I did the first leg of the Slumber Party tour, which was just in the northeast of the U.S.,” Oakley told the Daily Dot while at South by Southwest. “Now we are going to Australia, the U.K., Canada, the U.S., Ireland, everywhere.”

Oakley made the announcement of his tour on YouTube. It kicks off May 13 in Dublin, Ireland.

“There’s certain weekends of tour or timeframes of tour, some a little bit longer,” he explained. “I want to be able to give my most and my all each time. They asked me at the end [of the last tour] about how many stops I wanted to do at once. I want to be able to actually enjoy the cities. Last time it was go, go, go. This time I hope I’ll be able to experience each city.”

Oakley said his major concern was to bring intimate experiences to locations that don’t often get conventions or tour visits.

“Every time I’m at a place, or when I tweet “‘City,’ I am in you,” everyone is like ‘when’s the meet up?’” he said. “So this time I get to dedicate a trip to these places that don’t normally have conventions or tour stops.”

He was able to live up to that aspiration while in Austin, Texas, during SXSW this week, hosting a meetup for non-badge holders in the area. He also spoke on three panels during the conference.

“There were a lot of questions about traditional versus digital, the monetization, the integrity of it all. Internet 3.0, etc,” he explained. “A lot of good discussions where I learned a lot from people on the panels. This is probably my most professional SXSW yet. This is my third year, but the one where I feel like I worked the most.”

For those not in Austin, Oakley made a TV appearance this week as well, co-hosting MTV’s Catfish with Nev Schulman.

“It’s one of those shows you watch at home and you’re fascinated, but to be in the middle of it all, it’s like drama unfolding before your eyes,” he said. “It was like a mystery you were solving. There’s certain points where I was positive this was going to be the outcome, and it was a completely different situation in reality.”

With that hosting gig completed, Oakley moves on to another one on March 23, when he plays host to the YouTube Music Awards, a digital event where winners will be awarded across several categories and new music videos will be released from both up-and-coming and mega-popular acts.

“It’s a cool thing, especially because two years ago was the last time they did the YouTube Music Awards. I was seeing the reaction as it was happening online. A lot of people from the YouTube community were saying they wished there was more YouTuber involvement. I even tweeted at them saying, ‘Hey if you need a host, hit me up.’ And they did!”

Hosting is an aspiration of Oakley’s, and he calls the opportunity to do it on his “home turf” an honor. While he could be compared to a “young Ryan Seacrest,” Oakley he laughs and says he thinks of himself as “a young Oakley,” but has reverence for the host and producer who has broken a lot of Hollywood ground.

For those looking for a taste of Oakley’s hosting skills in person, tickets for the domestic leg of his tour go on sale March 21.