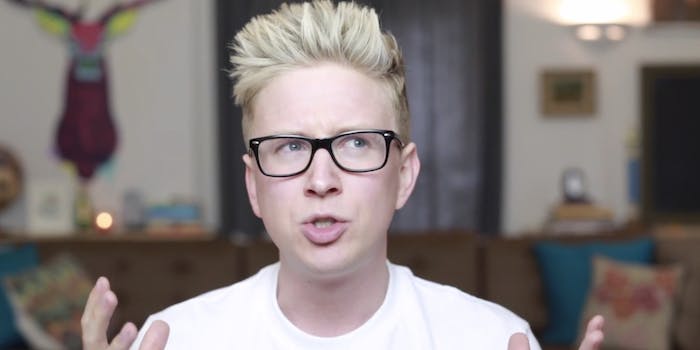 You can own a piece of the book before it comes out if you pre-order.

Now fans of Tyler Oakley can hold at least a piece of him in their hands—in book form.

Oakley announced to this 6.8 million YouTube fans that his next adventure will be the printed word, releasing a book in October called Binge.

He describes the book as featuring “everything I’ve wanted to share with you but didn’t feel quite ready to.” Oakley said he’s been working on the project since he turned down another book offer in 2012. At the time he says he wasn’t ready, but after writing for two years, he signed a deal with Simon and Schuster in December 2014.

Oakley isn’t the only YouTuber to ink a deal with a publishing house; it’s become something of a trend for digital stars to turn back to pen and paper in the past year, with big names like Hannah Hart and Zoe Sugg putting out tomes. Oakley referenced his hesitation in the past over a book deal in an interview with the Daily Dot earlier this year.

“I have had so much feedback that [a book] is something people want,” Oakley said. “Writing is something I want to explore. If I were to do it, I would want it to be not a book made by a YouTuber; I would really want to respect that craft of literature and just be an author. Detach myself as a YouTuber, because I don’t want to ever look at an opportunity, whether it’s book or TV or movie or whatever, as—not to say that anybody has or is doing it—as a moneymaking opportunity. If I were to want to do a book, it would be because I have a passion for it, and I respect the literary world. I don’t want to look at it as an extension of me as a YouTuber; it would be a whole different facet of me as a human.”

Binge is already available for pre-order, and one lucky fan who tweets him about their purchase will win a signed page of the notebook Oakley used to draft the book. Oakley is continuing to include Web sensibilities to the book, launching his Snapchat account in conjunction with the book announcement and encouraging fans to join him there to help create “tiny bits of the book” that are still in progress.