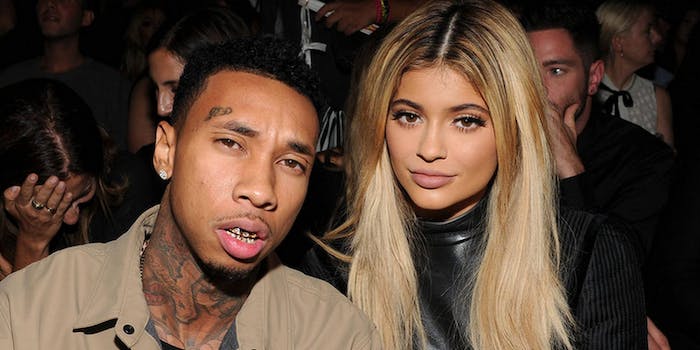 The most sweltering romance of 2015 has come to an end.

And so it is with leaked gossip and a new rap single that the most sweltering romance of 2015 has come to an end. On Thursday, Kardashian prodigy Kylie Jenner reportedly broke up with rapper Tyga. While details remain murky, this much is clear: Baby, now we’ve got bad blood.

Tyga threw himself a lavish, star-studded birthday party late Thursday sans Jenner. According to People, Jenner broke the news to him that day after what was characterized as rampant womanizing and a more recent “breach of trust.” Jenner, for her part, has remained silent across social media but did pause to post a self-portrait Friday.

Of note: On Tyga’s birthday, no one from the Kardashian or Jenner family wished him well across Twitter or Facebook. But that’s apparently just fine. In fact Tyga’s new single, “Happy Birthday,” takes a public relations victory lap. Think Tupac’s “Hit ‘Em Up” in terms of bragging about sleeping with a new rival’s friend, only conjured to imitate Drake‘s commercial stylings and devoid of punch.

Of course, “Happy Birthday” definitely packs its share of subtweets.

Here he’s biting back at tabloid culture, with some likely digs at his ex. Those include:

And while Jenner is not explicitly implicated, what is unmissable is the notion that Tyga here is bragging about mixed company:

The news caused “Tyga” to trend nationally on Twitter late Friday. Unfortunately, that may not be a good thing for his career:

Tyga has never trended on Twitter for anything good