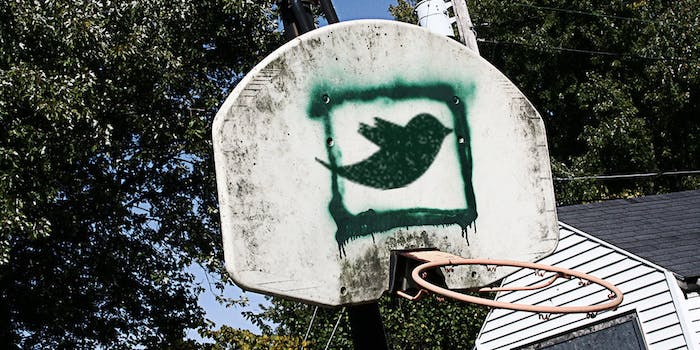 From bizarre outbursts and doping allegations to impromptu flag football games and press conferences, Twitter tracked and fueled the most interesting moments in sports this year—as captured by this comprehensive timeline.

Those who make it a habit are likely to foster a loyalty and dialogue with fans, proving consistently funnier or more down to earth than anyone realized. But athletes also often forget they’re under intense scrutiny: Several were fined for upsetting people or their employers with tweets this year—and one lost his job entirely.

Of course, intimacy with athletes is only half the reason Twitter has become such a great tool for sports fans. Its instantaneous speed, widespread use, and ability to track topics means there’s simply no better way to share online and in the moment the excitement of a thrilling catch, basket, or goal. That’s why six of Twitter’s 15 most active moments of the year were in response to sporting events that had just happened.

Whether it’s looking at the world of sports through the lens of Twitter or vice versa isn’t always clear. Either way, we’ve collected a timeline of the biggest sports moments of 2011 on Twitter.

Feb. 6 The Super Bowl
Over the course of the Super Bowl, the tweets-per-second record for a sporting event is broken not once—not twice—but six times, topping out at 4,064. The biggest scoring play, in terms of TPS, occurs after Green Bay Packers safety Nick Collins’ pick-six in the first quarter.

June 1 Superman retires
Shaquille O’Neal makes history by bluntly tweeting his exit from professional basketball: “im retiring.” He links to a brief Tout video where he thanks his fans for their support: “That’s why I’m telling you first.”

June 4 Toomer’s Corner
Harvey Updyke Jr., an Alabama fan notoriously accused of poisoning the famous 130-year-old oak trees at Auburn’s Toomer’s Corner, apparently deletes the two-week-old Twitter account bearing his name. The account wouldn’t be the last time he would make statements against his lawyers’ advice. “I hope they do not charge me with master-minding the 9/11 attack,” he tweeted at one point.

July 8 Hollow apology
DeSean Jackson undercuts his own apology to the gay and lesbian community with defiant tweets. A week before, he had referred to a caller during a live radio interview as a “gay-ass faggot.” After issuing statement, he tweeted a decidedly different sentiment in all caps: “THEY LOOKN 2 TAKE YA DOWN AT ALL TIMES NO MATTER HOW POSITIVE AND WHAT U DO!! ITS ALWAYS AWAY THEY TRY TO GET YA…. IM STANDIN TALL.”  Though tweets from that day have since been deleted, Jackson still keeps his account active.

July 9 No way Jose
Consistently a rich source of almost unbelievable drama, former slugger and steroid whistleblower Jose Canseco tweets a string of messages that conveys an utterly desperate man—then deletes them all.

July 17 Two for one
The overall tweets-per-second record is broken by two different soccer games on the same day. First, underdog Paraguay defeats powerhouse Brazil in a thrilling shootout during the Copa America quarterfinals, which racked up 7,166 TPS. Then Japan upset USA in the FIFA Women’s World Cup final, resulting in 7,196 TPS.

Aug. 16 A real gas
Angels RF Torii Hunter accidentally traps himself in an oxygen chamber. With no one else around, he turns to Twitter to lament his state. “I have to use the restroom. LET ME OUT!!” he tweets, then writes “Still trapped but I’m ok know. Used a Gatorade bottle. Hope I don’t get thirsty. Awww that’s nasty! Lol.”

Aug. 18 Good sport
Twitter proves a great medium for sportsmanship when Brandon Morrow tweets an apology for hitting Casper Wells in the nose with a pitch, knocking him out of the game: “Casper, sorry about the pitch that got away tonight.” Wells responds in kind: “no worries man. Just grazed the schnaz a little bit, nothing serious.”

Aug. 30 Funny people
Former Orlando Magic guard Gilbert Arenas deletes his Twitter account after getting into an unlikely feud with a New York City comic. Joe Mande had written a blog post about sexism on Arenas’ Twitter. Arenas tweeted back lamely: “the funniest thing u said in the article was ur a comedian,” then hit delete. Arenas was fined by the NBA in June for unspecified tweets.

Sept. 6 Greetings from North Carolina!
Cornerback Darius Butler, cut a few hours ago by the Patriots, learns he’s been picked up by Carolina when Panthers fan tweet him welcome messages.

Sept. 7 Fighting words
Milwaukee Brewers outfielder Nyjer Morgan tries to provoke Albert Pujols on Twitter, a few hours after the two nearly fight during a game. Morgan, who tweets under his alter-ego Tony Plush, writes “Alberta couldn’t see Plush if she had her gloves on!!! Wat was she thinking running afta Plush!!! She never been n tha ring!!!”

Oct. 5 The Blind Side
Though Steve Jobs’s death trends worldwide, and at one point users tweet about him 6,049 times per second, at least one person doesn’t fondly recall the Apple founder. “Can somebody help me out? Who was Steve Jobs!” tweets Michael Oher. The Ravens tackle and The Blind Side inspiration has since deleted the message.

Oct. 6 A woman scorned
After stating in 2010 that he didn’t plan to join Twitter, Michigan quarterback Denard Robinson gives a clinic on its dangers. Apparently hacked by an ex, his account tweets out a string of spurned-lover messages, including “You cheated on me our entire relationship!” and “I can care less who sees this because you didn’t give a DAMN whether you hurt me or not.”

Oct. 10 Overkill
NBA vet Kenyon Martin, upset with something someone tweeted at him, issues a rather strong rebuttal from his verified account, @OakcliffBully: “All Haters should catch full blown Aids and Die! Do the world a favor!and rid us of you all!” He soon deletes his account.

Oct. 31 Fantasy football
A single casual tweet leads to the coolest player-fan intereaction of the year when
Kevin Durant tweets “This lockout is really boring..anybody playing flag football in Okc.” Oklahoma State student George Overbey tweeted back that he indeed had one: “Got a game tonight in Stillwater!! I need a deep threat!!” Durant proved himself a true two-way player, throwing four TDs and grabbing three INTs.

Nov. 8 Impromptu press conference
Reeling from allegations surroudning former defensive coordinator Jerry Sandusky, Penn State head coach Joe Paterno had been asked by the university to not speak to the media. But the media come to Paterno’s door, in the form of students and fans who gathered on his lawn to give his support. He was clearly move  and gave a rambling speech that tried to focus on the positive. When the crowd tweeted everything he said, though, Paterno came off as more doddering and out of touch than anything.

Nov. 8 Kid gloves
Former lightweight UFC champ Forrest Griffin tweets what is at least his third rape joke in a week: “Rape is the new missionary,” and this one catches fire. He publicly apologizes, and UFC President Dana White covers for Griffin, saying he simply tweeted poorly. Griffin was shaken by the Sandusky scandal and hearing about a woman getting raped, White says, and was lamenting how common it seemed.

Nov. 29 CP3 trade rumors
NBA All-Star Chris Paul trends on Twitter for the first of several occurences as rumors surface that he’ll soon be traded to the Knicks. He’s traded to the Lakers, but in a highly controversial move, commissioner David Stern blocks the trade. Paul, normally reserved and never one to complain, spoke volumes when he tweets a single word: “WoW.” That was retweeted over 15,000 times. Ironically, by the time Paul’s trade to the Los Angeles Clippers finally happens on December 14th, his name, while widely mentioned, doesn’t trend.

Dec. 7 TKO
A month after Forrest Griffin’s infamous tweet, Miguel Torres tweets a rape joke of his own: “If a rape van was called a surprise van more women wouldn’t mind going for rides in them. Everyone likes surprises.” Dana White fires him the next day: “there’s no defense for that,” White says.

Dec. 22 Prince of fools
Marlins prankster Logan Morrison punks the Chicago sports media by tweeting “Just heard from my boy that Prince to Seattle is a done deal.” He soon makes it clear he wasn’t talking about Prince Fielder, as Morrison’s next tweet is “Purple Rain & When Doves Cry are going to sound unbelievable this summer under the lights at Century Link Field.” That didn’t stop WGN radio in Chicago, flagship station for the Cubs, from running with the “news,” that Fielder is now off the market.