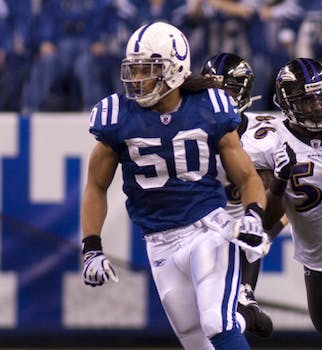 It wasn't money or fame that convinced Wheeler to move to Oakland. It's was the support of #RaiderNation on Twitter.

The Oakland Raiders have found a new way to lure free agents out to the Bay Area: rallying fans on Twitter to show their support.

The team, long regarded as having a fan base as fanatically devoted as its team has been statistically deplorable, recently agreed to terms with former Indianapolis Colts linebacker Philip Wheeler.

If you ask Wheeler, it was neither the money nor the notion of California sunsets that brought him out to Oakland; it was the overwhelming welcome he received from Raiders fans on Twitter, who followed the linebacker in hoards and tweeted at him to sign with the black and gold.

Speaking on a Monday conference call with members of the Bay Area media, Wheeler said that he received 2,000 new followers when news leaked that he was traveling out to California to meet with Raiders executives.

“It was cool, man. “That kind of helped me in my decision, because it showed me how big of a football city this is and how much they paid attention to football instead of going somewhere else. Indianapolis, it was a pretty good football city, but the fans didn’t get more involved in media and just showing us how much they care about the game.”

Members of the Raiders fan base started tweeting encouraging messages at Wheeler as soon the linebacker announced that he’d hopped a plane from Miami to Oakland.

“Being a Raider is not a career choice,” wrote S.A. Martin. “it’s a life choice!!!! It will change your life for the better!! #RAIDERNATION #RAIDERS”

“Oakland is doing it big this year,” added Nelson Estevez. “Come to the dark side.! #RaiderNation”

Shortly before signing, Wheeler tweeted out a message of support to his new fan base: