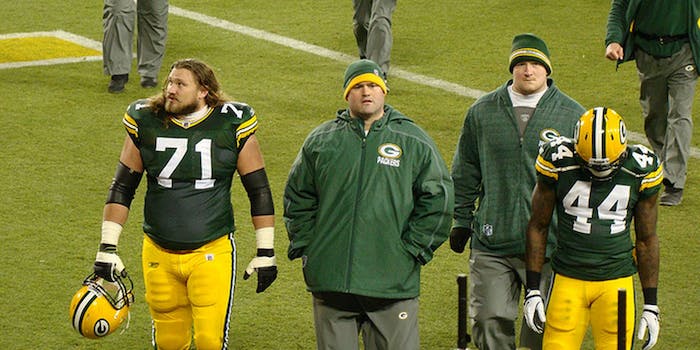 Replacement refs brought in during failed union negotiations continue to cause a major kerfuffle on social media.

The National Football League’s (NFL) replacement referees are being lambasted by NFL players on Twitter. Again.

“Got fucked by the refs.. Embarrassing. Thanks nfl,” Lang tweeted after his team lost to the Seattle Seahawks in a controversial play that just about everyone thought should have resulted in a Green Bay interception and victory.

The incensed guard shortly followed with another profanity-laced comment.

“Fuck it NFL.. Fine me and use the money to pay the regular refs.”

The “regular refs” would be members of the NFL Referees Association, the union currently in a contract dispute with the league.

Lang’s words seemed to have resonated with fans everywhere. As of this writing, both comments have been retweeted over 60,000 times.

“Accountability: The moment a player does something to embarrass the shield, swift & immediate action takes place! WHY not now?! Jussayin” wrote teammate Desmond Bishop, referencing the NFL’s code of conduct that’s often cited by Commissioner Roger Goodell when he fines a player.

“Come on @NFL this shit is getting out of Control. Caused us a DAMN game. Horrible!” tight end Jermichael Finley chimed in.

“The nfl needs to come to gb and apologize to us for fucking us! These refs r bums!”  added fellow guard Josh Sitton.

Players for the Green Bay Packers were not the only ones trashing the NFL and its replacement refs on Monday night. According to Topsy, a social media analytics service, the NFL was mentioned more than 22,000 within an hour after the game’s final whistle.

Among those tweeting about the debacle was ESPN analyst Skip Bayless, whose network broadcasted the Monday Night Football game.

“If that doesn’t end the owners’ lockout of the real refs, I don’t know what will,” he noted. “The NFL looks like the WWE.” Bayless was referring to World Wrestling Entertainment, a sports entertainment enterprise known for staging the end of its fights. Bayless’s comment has been retweeted more than 11,000 times.

Piling on were regular football fans who, like the Packers players and Bayless, were flabbergasted.

“Not watching the nfl till these replacement refs are gone,” wrote MarkAckerman22. “Pathetic. Helen Keller would be a better ref than these idiots.”

“Tate says he does it all for God. I’d believe in God too, after that call,” snarked NotZombies, alluding to Seattle Seahawks wide receiver Golden Tate’s touchdown catch and post-game interview.

And Packers players and fans are just the latest to vent about the replacement referees via the microblogging platform. Early Monday morning, New England Patriots linebacker Brandon Spikes and Baltimore Ravens linebacker Brendon Ayanbadejo complained about the shoddy officiating during Sunday night’s primetime game between the two teams, a game won on a controversial field goal by the Ravens.

In contrast, the NFL is remaining silent on the issue. Immediately after the game,  the league’s official Twitter account tweeted an image—not of the game’s final play—with a caption that read “Seattle wins on Hail Mary,” but deleted it after the ensuing social media firestorm. A screengrab of the tweet was uploaded to r/sports, a subsection of popular news site Reddit, by user matlockga.