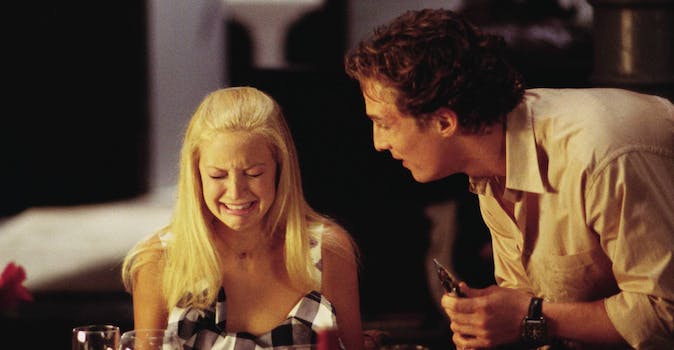 Step away from the dating apps.

Sure, rom-coms and tv shows get bad raps for setting our romantic expectations way too high. But when they’re done right, our favorite movie couples can inspire us to turn up the romance in our own lives and be healthy relationship examples.

However, some of our favorite relationships to binge-watch should come with a “Don’t try this at home” warning label.

We’ve ranked some of the most iconic TV and movie couples from the toxic to healthy relationship examples. Get ready to binge, pour yourself some wine, and take notes on the biggest do’s and don’ts.

The best and worst TV and movie couples

1) Most toxic movie couple – Jackson & Ally, A Star Is Born

Bradley Cooper and Lady Gaga’s chemistry is undeniable. Exhibit A: their 2019 Oscar’s performance. However, A Star Is Born shows how a person’s demons can seriously hurt loved ones. Jackson Maine struggles with depression, alcoholism, and the fading of his fame.

When Ally’s star power starts to eclipse his, he spirals further out of control, causing her pain and humiliation. The infamous awards show scene is painful to watch. For Jackson and Ally, there is no happy ending, just a reminder that toxic relationships can lead to further trauma.

2) Makes us glad to be single – Margaret & Andrew, The Proposal

In the 2009 rom-com, Sandra Bullock plays a Canadian publishing executive who’s threatened with deportation. Her solution? She forces her assistant, Ryan Reynolds, to marry her. Margaret abuses her power over Andrew, making him commit fraud with her.

If that’s not red-flag enough, Margaret is not exactly kind to Andrew throughout the process, either. While real feelings do develop between them, we can’t say this is the best way to find love – or that it wouldn’t lead to a workplace misconduct suit out here in the real world.

3) Stress-inducing movie couple – Andie & Ben, How To Lose A Guy In Ten Days

Almost 20 years after its 2003 release, How To Lose A Guy In Ten Days remains the ultimate template for what not to do in a relationship. In all fairness to Kate Hudson and Matthew McConaughey, this is expected; they’re brought together by a duplicitous magazine assignment and a high-stakes bet.

Built on lies, the relationship spirals into more toxicity when Andie and Ben start to have real feelings for each other. Is there anything more chaotic than when the couple gets onstage at Ben’s work gala, hurling lyrics to “You’re So Vain” at each other? There simply is not.

For a show that’s going into its 19th season, there’s no shortage of couples for us to root for in Grey’s Anatomy. Still, Callie and Arizona remain one of the most beloved couples in the Grey’s universe years after they have appeared onscreen.

Like real couples, Callie and Arizona go through highs and lows together. Sadly, their love story gets interrupted by a tragic plane crash. Arizona is badly injured and Callie is forced to make the choice to amputate Arizona’s leg in order to save her life.

As strong as they are, the couple never fully recovers from that trauma and their relationship disintegrates before our eyes.

Jennifer Garner’s Jenna Rink is about as toxic as a gal can get in the 2004 film: ruthlessly cutting down her co-workers, sleeping with married men, and distancing herself from people who care, like her parents and her old high-school best-friend, Matty.

However, when Jenna’s 13-year-old self emerges into this 30-year-old reality, she gets the opportunity to change for the better, making amends with Matty. The pair become a healthy movie couple whose love is built on friendship.

6) A love based in friendship – Harry & Sally, When Harry Met Sally

In the 1989 Nora Ephron film, Billy Crystal and Meg Ryan attempt to be platonic friends who don’t let sex come between them. Harry doesn’t think this is ever really possible, but, for a little while at least, he’s proved wrong. In a vulnerable moment when Sally is upset over an ex, the two friends kiss and end up sleeping together.

Harry makes the wrong move and quickly leaves the next morning, feeling awkward. While this is certainly not the healthy way to deal with the situation, Harry and Sally end up using their time apart to reflect and realize how much they mean together.

When they finally do get married, it’s safe to say their marriage will be a healthy one – they’ve already known each other for twelve years.

In Sweet Home Alabama, Jake and Melanie start out a long way from being healthy. Reese Witherspoon’s Melanie needs Josh Lucas to sign their divorce papers because she’s engaged to another man. The long-estranged couple falls back into familiar feuds, stubbornly refusing to give the other what they want.

However, they share tender moments along the way and begin to see the past from each other’s point of view. When Melanie walks out on her wedding for Jake, it’s a victory for second chances, forgiveness, and acceptance.

Cameron Crowe’s 1996 film starring Tom Cruise may be called Jerry Maguire, but the couple goals in this movie don’t come from Cruise. Instead, Cuba Gooding Jr.’s Rod Tidwell steals the show with his wife, Marcy.

Marcy tirelessly advocates for her husband when Jerry isn’t taking him seriously enough as his client, and everything Rod does in his career is for the benefit of his wife and children. Plus, their relationship is filled with everyday joy, humor, and intimacy.

Without Rod and Marcy as an example, Jerry would never be able to realize the love available in his life.

9) The healthiest relationship on TV – Randall & Beth, This Is Us

This Is Us has earned a place in our hearts for its honest portrayal of familial bonds and conflicts. While it’s Jack and Rebecca’s love story that gets inflated to folkloric proportions in the Pearson family, it’s Randall and Beth who really show us what love means.

The tv couple puts their marriage first, even when things get rocky and the decisions are difficult. At the same time, they never let each other give up on their personal dreams. We could easily be tricked into believing they were married IRL for all the wordless glances and gestures that communicate their love.

We know what you’re thinking: The Dutton ranch is not what comes to mind when you think of healthy relationships and general wellbeing. However, Yellowstone has actually given us one of the greatest examples of unconditional love in all of TV: Rip and Beth.

Both Rip and Beth have broken, complicated pasts and a capacity for violence. However, the love they have for each other offers a safe haven for healing. In fact, Rip quite literally saves Beth’s life.

They are each other’s fiercest protectors and they accept each other for exactly who they are. Together, they prove that once-in-a-lifetime love can live in broken places.