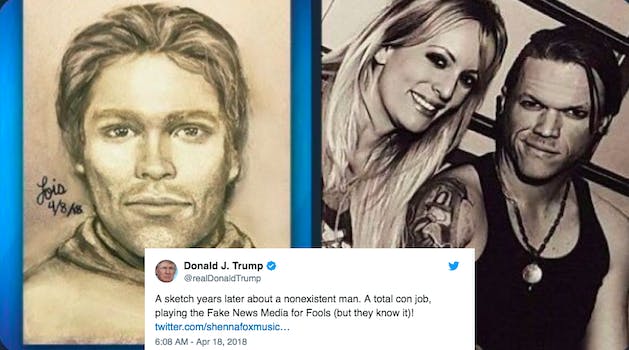 We're all getting played here.

The top story on the internet on Tuesday was the reveal of a sketch of a man Stormy Daniels said threatened her and her family for speaking out about an affair with President Donald Trump.

Since everyone was buzzing about it, the president couldn’t stay silent on the matter, quote-tweeting a supporter who shared a picture of Daniels’ husband, Glendon Crain.

Trump has stayed remarkably silent on the Daniels matter, which is impressive given his typically outspoken nature on pretty much everything.

While sleuths on the left felt they had found the man behind the threat in a video from a Trump fundraiser, Trump supporters jumped on the fact that Daniels’ husband looked like that man in the sketch.

Although some noted Trump’s wording contradicted himself, because if it never happened, why would it be years later?

Years later after what? https://t.co/kRtvV2b8xF

Maybe we’re all just getting played.