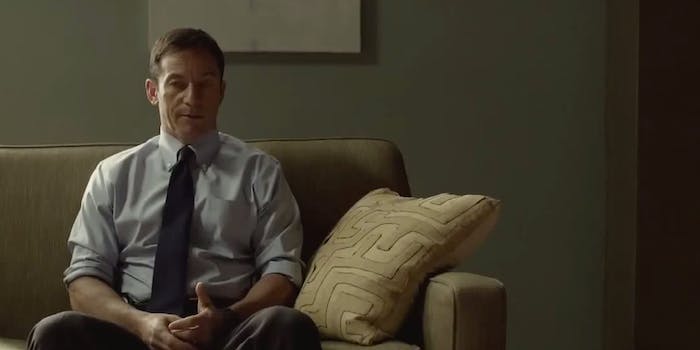 Get obsessed with these five shows.

Game of Thrones just wrapped another season and sent the Internet into a collective rage, and now HBO is moving on to its next pop-culture phenomenon: True Detective.

The freshman season, which starred Matthew McConaughey and Woody Harrelson, became a watercooler sensation last year, but many fear it will suffer a sophomore slump, since it’s focusing on entirely new storylines and characters this time around. And it’s the characters that truly made True Detective great, elevating crime material we’d seen a thousand times before by filtering it through the lenses of inimitable detectives Rustin Cohle and Martin Hart.

Of course, not all of us have an HBO subscription (or an HBO Go code we can borrow), so there will inevitably be some folks feeling left out of tonight’s True Detective season 2 debut. Thankfully, Netflix and the Daily Dot have your back. We’ve compiled five streaming alternatives to True Detective that involve elements of crime and are anchored by interesting, flawed, complex characters. And, just like True Detective, each show is contained in a single season, so they’re perfectly suited for summer binge-watching. Enjoy.

Even five years after FX gave Terriers the axe, this wound is still fresh. Created by Ted Griffin (Ocean’s Eleven, Matchstick Men), Terriers stars Donal Logue as Hank Dolworth, a recovering alcoholic ex-cop who works as an unlicensed private detective in the Ocean Beach neighborhood of San Diego. His partner is his best friend, Britt (Michael Raymond-James), a former criminal Hank once gave the benefit of the doubt. Naturally, Hank’s family situation is complicated as well: He’s got an ex-wife he’s still hung up on, and his schizophrenic sister has taken to hiding out in his attic. Over the course of Terriers‘ single, damn near perfect season, Hank and Britt struggle to make ends meet, stay out of trouble with the cops, and solve the one case they can’t shake: a murdering real estate developer who opens the door to a far larger conspiracy involving powerful people who would prefer Hank stop nosing around already and possibly also die.

Hamstrung by a confusing marketing campaign that involved an actual dog and no clues as to what the show was about, Terriers just didn’t get the ratings it needed to survive, and that’s the biggest crime of the entire series. Still, the show landed on tons of critics’ “best of 2010 lists,” and was even nominated for Outstanding New Program by the Television Critics Association. The cast is uniformly stellar, with Logue and Raymond-James bringing the core characters to life in rumpled, hilarious fashion. The season-long arc is packed with twists and turns, featuring scripts by top-notch TV vets like Shawn Ryan (The Shield) and Tim Minear (American Horror Story). In a perfect world, Terriers would be five seasons in by now. If the show taught us anything, it’s that the world is far from perfect, but that doesn’t mean you aren’t obligated to try to fix it anyway.

Over the course of True Detective’s first season, many speculated that some of the show’s more surreal elements were leading up to the show having some sort of paranormal component. In the end, that never materialized, but that ambiguity is partially what led to the inclusion of the underrated Awake on this list. Airing for a single season on NBC in 2012, Awake starred Jason Isaacs (Harry Potter’s Lucius Malfoy) as Michael Britten, a cop who was in a horrible car wreck with his wife (Laura Allen) and son (Dylan Minette). Now he’s caught between two alternate realities. In one world, his wife is alive, but his son died in the crash. At the end of a day spent in that world, Britten closes his eyes and wakes up in the other, where his son survived the wreck but his wife didn’t. Is he crazy? Dreaming? Really bouncing between parallel universes? All Britten knows is that he desperately wants both realities to be true.

Awake creator Kyle Killen has said the concept of the show was inspired by the way dreams can feel totally real until you wake up, and the core moral quandary is hugely compelling. Would you want to know the truth, to “wake up” if it meant losing one of your loved ones all over again? Isaacs’ performance as Britten is both crucial and outstanding, showing us a man ricocheting between grief and gratitude, compelled by the mystery of his situation but also terrified to poke at it too much, lest it unravel and cost him everything. What became the series finale was written before the show was canceled, so don’t expect every question to be answered. In the case of Awake, that ambiguity is actually perfectly consistent and satisfying.

Created by Paul Haggis and Paul Moresco (Crash), The Black Donnellys is the story of four brothers navigating family, religion, and organized crime in New York City’s Hell’s Kitchen. Setting is nearly as integral to The Black Donnellys as themes of family, exploring the slow gentrification that is pushing out the traditional Irish residents and power structures, as well as Irish-American organized crime headbutting with its rival, the Italians. Jonathan Tucker stars as Tommy Donnelly, the second oldest of the brothers and the one who always cleans up his siblings’ messes. Jimmy (Tom Guiry) is the eldest, a drug addict and thug with a bad temper. Kevin (Billy Lush) is the second youngest and a gambler, but a bad one. Sean (Michael Stahl-David) is the youngest of the clan, a ladykiller his older brothers try to keep out of trouble.

The Black Donnellys follows Tommy’s attempts to stay on the straight and narrow, only to be continually pulled back into the rough by his disreputable brothers. The show’s excellent cast also includes Olivia Wilde as Jenny Reilly, a childhood friend Tommy is completely in love with; Star Trek: Voyager’s Kate Mulgrew as the Donnelly clan’s widowed matriarch, Helen; and Keith Nobbs as Joey Ice Cream, a longtime friend of the Donnellys who serves as the show’s unreliable narrator, frequently revising or tweaking the story as he tells it.

Hit & Miss is a British series that originally aired on Sky Atlantic and DirecTV’s Audience Network here in the States. Chloe Sevigny stars as Mia, a preoperative transgender woman who works as a contract killer for some very bad people. Years after leaving Yorkshire, she returns upon learning of the death of an ex-girlfriend and, more importantly, that she fathered a son she never knew about. Mia finds herself guardian of not only her 11-year-old son, but his three half-siblings, something neither she nor the children are thrilled about. Nor are her criminal bosses willing to lose her to domesticity. She must juggle newfound parenthood against her continuing obligations in the “killing people” department, while also navigating tricky romantic waters with local lad Ben and dealing with arguably the worst landlord in history.

Hit & Miss actually began as two unrelated dramas: one about a transgender mother and another about a hitman. Series creator Paul Abbott came up with the clever idea to combine the two, resulting in a wholly unique series that blends family and relationship drama with crime elements and a fascinating protagonist. Sevigny gives a fine performance as Mia, although her accent is occasionally spotty, and it’s kind of a shame a second season never materialized. Transgender characters are getting a lot of exploration on shows such as Amazon’s Transparent and Netflix’s Sense8, so Hit & Miss is more timely now than when it originally aired in 2012.

Patrick “Lights” Leary is a retired heavyweight championship boxer living the good life. He’s got a beautiful wife and three amazing daughters, a big house, and the comfortable lifestyle his career afforded him. Well, he used to have that, anyway, before his crook of a brother/business manager burned through the family’s entire savings. Now, Lights is forced to attempt a comeback while suffering from the early stages of “pugilistic dementia,” the toll all those years of getting hit in the head took on him. And if he starts getting hit in the head again on a regular basis, things will only get worse. He’s got other options, of course. He could always take work as muscle for a local gangster, but that’s not exactly the sort of thing that’s going to make his daughters proud.

Lights Out fits squarely into the mold of “deeply flawed male antiheroes” that defined much of cable drama in the era between The Sopranos and the recently wrapped Mad Men. Actor Holt McCallany makes Lights a hugely sympathetic lug you can’t help but root for, but one who often makes terrible decisions, starting with hiring his dishonest and incompetent brother as his business manager. Sadly, Lights Out couldn’t keep the lights on in 2011, failing to attract an audience in spite of mostly solid reviews. Still, it works well as a sort of self-contained miniseries, resolving the big dilemma of whether Lights will get his championship back but leaving viewers with an ending they’ll have a hard time cheering for.