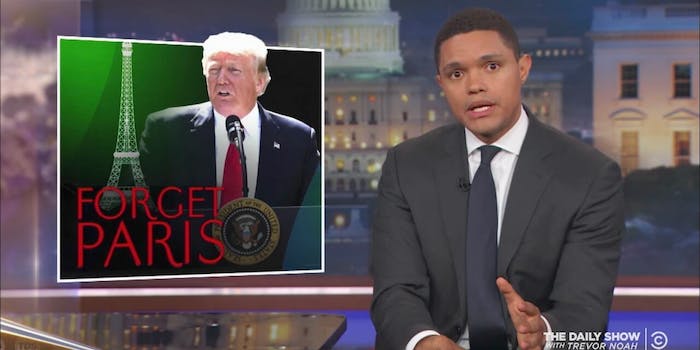 'We all joke about him destroying the world, but this could be it.'

Donald Trump’s decision for the U.S. to exit the Paris Climate Accord Thursday left politicians, scientists, CEOs, and world leaders in shock and anger, but for Trevor Noah, it was basically as if Trump just gave the rest of the world the middle finger.

“We all joke about him destroying the world, but this could be it,” Noah said. “And can I just say, telling nature to go fuck itself while standing in a garden is a pretty gangster move, I’m not going to lie. The only way that could have been more messed up is if he did it with a polar bear standing in the background. Although I’m sure Eric would have shot the polar bear.”

Tackling the decision on The Daily Show, Noah compared Trump’s announcement in the White House Rose Garden to The Bachelorette and noted that Trump’s decision would make it just the third country in the world to not abide by agreement. The other two countries are Nicaragua, which thinks doesn’t the deal doesn’t goes far enough, and Syria, which is in the midst of a civil war.

In his speech confirming the decision, Trump said he was putting “America First” and noted that he was elected to “represent the citizens of Pittsburgh, not Paris,” which prompted Pittsburgh Mayor Bill Peduto to quickly point out Trump lost the vote there, before confirming his city would follow the guidelines set in the Accord.

But Trump also mischaracterized the celebration from the rest of the world after the U.S. signed the deal. Trump thought the world was laughing at the U.S. for signing it.

“No one was laughing at you, Donald,” said Noah. “I mean, well, not for this. They laugh at you for many other things, but not for this. The other countries were cheering, because it was a chance to save Mother Earth, not screw Uncle Sam.”