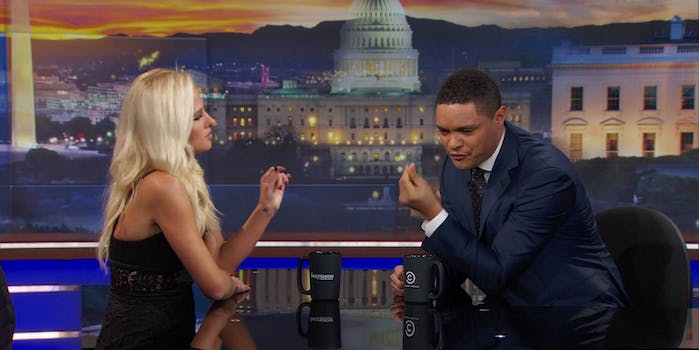 So much to unpack, so little time.

Less than two months after declaring his love for the Blaze’s Tomi Lahren, Trevor Noah interviewed the commentator during Wednesday night’s episode of The Daily Show. The announcement came much to the horrific delight of many familiar with Lahren’s work.

please tell me you're joking about Wednesday

oh my gosh, Wednesday is going to be so good

Lahren, a 24-year-old conservative personality from South Dakota, is best known for her pointed “final thoughts” segment for the Blaze, and the large Facebook presence her videos bring.

Her clips on Beyoncé‘s Super Bowl halftime performance and Colin Kaepernick‘s protests have garnered millions of views. Though she’s a flip-flopped Donald Trump supporter, she’s even accused the Black Lives Matter movement of being the new Klu Klux Klan.

But Lahren’s interview with Noah showed a different side of her—more calm, less prepared, and definitely less intimidating than her most inflammatory critiques lead us to believe. Though The Daily Show only played six minutes of the interview on television, according to Lahren, Comedy Central has hosted the entire 26-minute-long interview online.

Perhaps surprisingly, Lahren and Noah had a civil discussion.

Noah took Lahren to task regarding her support of Trump despite his alleged treatment of women, her disagreement with Black Lives Matter and Kaepernick, and the anger in which she often delivers her “final thoughts.” And though Noah’s subtle jabs at Lahren’s responses illicited vocal responses from the audience, Lahren kept her cool and argued back.

To my fans: Trevor Noah is not a douche or a jerk. To Trevor's fans: I'm not a bitch or c*nt. We are people with opposing views. That's it.

Thank you for being my guest Tomi. Our goal should be to destroy these "bubbles" not each other. You're always welcome on my show. https://t.co/AairL3cdAy

No matter how civil their interview, however, there were definitely two points in the interview where the two reached a contentious philosophical impasse.

While telling Noah what she wished people understood about her, Lahren said she doesn’t “see color,” and thinks true diversity is diversity of thought, not by skin color. Noah, a mixed-race man who grew up in apartheid South Africa, said he didn’t believe her, then turned the conversation to Lahren’s intentions with her show.

Then Lahren and Noah exchanged a pair of awkward zingers at the interview’s conclusion. To a joke about how Trump was “touching people” with his campaign, Lahren replied, “Hillary could use some of that every now and then, right? Bill’s a little busy, Bill’s a little busy.”

Given how starkly different Noah and Lahren’s views are, that wasn’t the worst way that interview could have ended.

View the interview in its entirety below: